Karnataka Crisis: On Friday, the Supreme Court said no decision would be taken on the resignation or disqualification of the rebel coalition legislators until Tuesday.

Fourteen Karnataka rebel lawmakers, who are staying at a hotel in Mumbai after resigning from the state assembly last week, have written to the Mumbai Police again to seek protection from senior Congress leaders who may try to meet them.

Congress's general secretary Mallikarjun Kharge and Karnataka Deputy Chief Minister G Parameshwara are likely to visit the rebel lawmakers at Renaissance Hotel in Powai today for negotiations with the group that has endangered the survival of the year-old Congress-Janata Dal Secular coalition government in Karnataka.

In their letter, the rebel leaders have also named another senior Congress leader, Ghulam Nabi Azad. "We have absolutely no intentions in meeting Shri Mallikarjun Kharge ji or Ghulam Nabi Azad ji or any Congress dignitaries or functionaries from Maharashtra and Karnataka Congress team leader or any other political leader... we anticipate serious threat from them," the letter reads. The rebels may also approach the top court against the Congress leaders if they try to meet them, news agency ANI reported. 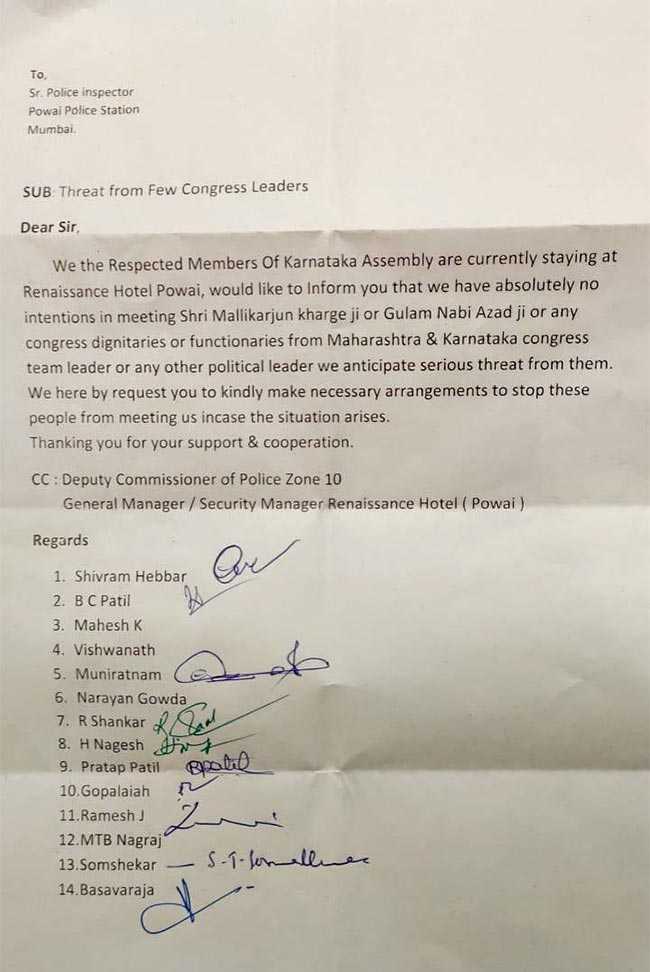 Last week, Congress leader DK Shivakumar, known to be the party's troubleshooter in Karnataka, was stopped from entering the Mumbai hotel after the rebels wrote to the Mumbai police asking for protection from him and other leaders. Mr Shivakumar, who refused to leave and waited outside the hotel for hours, was detained and then taken by policemen straight to the airport, from where he took a flight back to Bengaluru.

The rebels have alleged that Speaker Ramesh Kumar has not accepted their resignations to give coalition leaders time to persuade them to return.

On Friday, the Supreme Court said no decision would be taken on the resignation or disqualification of the rebel coalition legislators until Tuesday. The same day, Karnataka Chief Minister HD Kumaraswamy sought time for a trust vote to prove his majority, asserting there is no threat to his government.

Among those who have signed off on the letter to the Mumbai police seeking protection is Congress legislator MTB Nagaraj, who on Saturday had agreed to come back to the coalition fold after being coaxed by Congress leader Siddaramaiah and Mr Kumaraswamy.

On Sunday, however, he was seen climbing onto a private jet with state BJP chief BS Yeddyurappa's personal assistant, Santosh, walking behind him at HAL airport in Bengaluru. After landing in Mumbai, he declared that he would not change his mind about his resignation.

If the resignations are accepted, the coalition's 118 members will come down to 100 and the majority mark will drop from 113 to 105 in the 224-member assembly. Rival BJP has 105 members and the support of the two Independents, which takes its tally to 107. The coalition has accused the BJP's Yeddyurappa, a former chief minister, of engineering the crisis to seize power after failing to do so in May last year, when his party fell short of a majority.