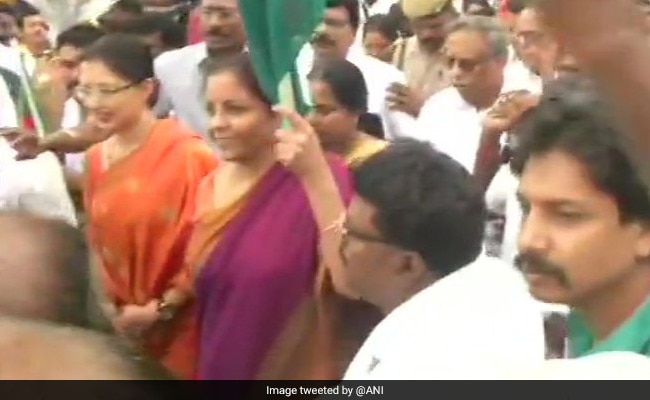 Finance Minister Nirmala Sitharaman was in Chennai for a walkathan

BJP leader and Union Finance Minister Nirmala Sitharaman waded through a waterlogged street in Chennai today as part of National Unity Day celebrations in Tamil Nadu. In a 28-second video shared by news agency ANI, Ms Sitharaman, wearing a bright purple saree, can be seen surrounded by a crowd of people carrying BJP flags and walking through flooded streets in the Shenoy Nagar area of the city, as a group of policemen gingerly pick their way ahead of the minister.

Prime Minister Narendra Modi's government marked National Unity Day today on the occasion of the 144th birth anniversary of Sardar Vallabhai Patel, as it has every year since he came to power in 2014.

The Prime Minister was in Kevadia in Gujarat, where he spoke about Jammu and Kashmir and Article 370, and said the decision to birfurcate it into two Union Territories was not meant to draw new territorial lines on the ground.

"Article 370 only gave separatism and terrorism to Jammu and Kashmir. It was the only place in the country where Article 370 was present, where in the last three decades, over 40,000 people were killed and several mothers lost their sons due to terrorism," PM Modi said at an event organised near a giant statue of Sardar Patel.

"We wanted to build a strong link of faith, the sort of faith that even Sardar Patel had dreamed of for Jammu, Kashmir and Ladakh," he added.

The centre has chosen today - Sardar Patel's birth anniversary - to divide Jammu and Kashmir into two union territories - Jammu and Kashmir, and Ladakh. As India's first Home Minister, Sardar Patel is credited for the merger of over 560 princely states into the Union of India.