Franco Mulakkal was divested of his pastoral responsibilities as the bishop of the Jalandhar diocese of the Missionaries of Jesus by the Vatican. 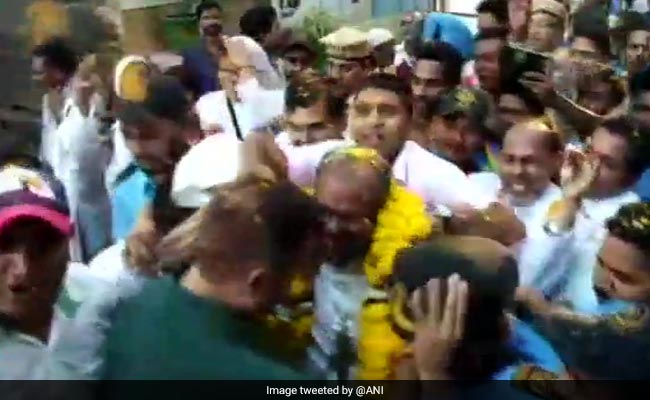 Franco Mulakkal, the senior Catholic priest accused of repeatedly raping a nun, was showered with rose petals and garlanded by his supporters as he reached Jalandhar on Wednesday. Mulakkal, who was escorted by personnel of the Punjab Police, was released from a jail in Kerala on Tuesday.

Mulakkal, till a few weeks ago, was the bishop of the Jalandhar diocese. He was seen smiling as his followers threw rose petals, reported news agency Press Trust of India.

"The prayers of the people of Punjab supported me. I believe that they will pray for me even in the days to come. I thank everyone. Investigation is underway and I am co-operating. I'm a law abiding citizen and I trust the legal system of the country," he told reporters.

Mulakkal, 54, was arrested after three days of questioning and amid protests over the sexual assault allegations last month. The Kerala government had assured the probe by the Special Investigation Team was proceeding in the "right direction" and that justice will be done.

On Monday, Mulakkal was granted conditional bail by the Kerala High Court after he spent three weeks in a jail near Kottayam. He has been directed to surrender his passport and not enter Kerala except for appearing before the investigating officer once in two weeks on Saturdays. This condition would be applicable till a charge-sheet is filed in the case.

In her complaint in June, the nun had alleged that she was sexually abused by Franco Mulakkal 13 times between 2014 and 2016 during his visits to a convent in Kottayam. The nun had said she approached the police as church authorities did not act on her repeated complaints against the clergyman. However, the bishop has denied the charges.

Franco Mulakkal was divested of his pastoral responsibilities as the bishop of the Jalandhar diocese of the Missionaries of Jesus by the Vatican.