Several areas in Haryana and Punjab were lashed by rain on Sunday and in Himachal Pradesh, authorities issued the least dangerous yellow warning for heavy rainfall in parts of the state on July 13 and 16. 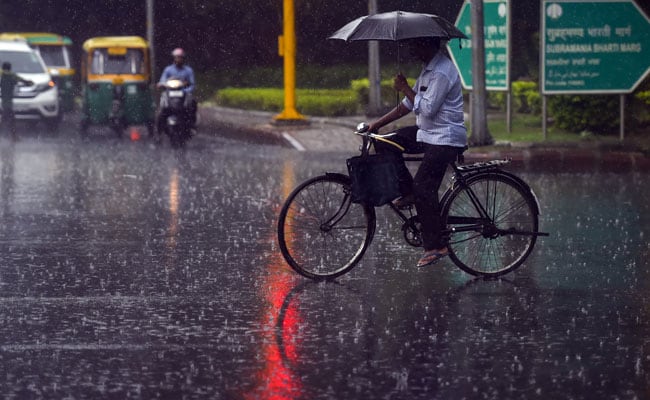 Rain forecast for Delhi for the next seven days remains bleak. (Representational)

Moderate-to-heavy rain lashed several states in northern, eastern and coastal India on Sunday, but the monsoon activity continued to remain subdued in Delhi, which has recorded a 40 per cent rainfall deficiency despite an early onset of the seasonal weather system, forecasting agencies said.

The monsoon activity over the desert-state Rajasthan too has remained weak over the past few days but is expected to pick up from Tuesday. Between June 1 and July 11, western Rajasthan has received 8 per cent less rainfall than normal while the eastern part of the state has got 13 per cent less, according to private forecaster Skymet Weather.

Several areas in Haryana and Punjab were lashed by rain on Sunday and in Himachal Pradesh, authorities issued the least dangerous yellow warning for heavy rainfall in parts of the state on July 13 and 16.

The India Meteorological Department said the rain forecast for Delhi for the next seven days nonetheless remains bleak as the monsoon trough has shifted further north.

"Usually, during this time, a strong weather system forms in the Bay of Bengal, moves towards northwest India and enhances monsoon activity," said Kuldeep Srivastava, the head of the Delhi region forecasting centre of IMD.

In July, at least three weather stations in Delhi have recorded less than normal precipitation. Since June 1, when the monsoon season began in the country, the city has recorded just 79.7 mm rainfall against the normal of 132.6, a deficiency of 40 per cent.

The monsoon reached Delhi on June 25, two days earlier than its usual date.

Skymet said the monsoon trough is running close to the foothills of Himalayas and an offshore trough is running from Goa to Kerala coast, bringing rains to northeastern states, West Bengal, Bihar, parts of Uttar Pradesh, Himachal Pradesh, Karnataka, Tamil Nadu and Goa.

With rivers in spate due to incessant rainfall, several low-lying areas in Darjeeling,

Jalpaiguri and Coochbehar districts of north Bengal were inundated on Sunday, as the MeT Department forecast more downpour in the next couple of days.

While the Teesta river inundated new areas in Mainaguri block of Jalpaiguri district, Torsa and Mansai rivers in Coochbehar were flowing above the danger level.

Siliguri in the plains of Darjeeling district recorded the maximum rainfall of 243 mm in 24 hours till 8.30 am on Sunday, while Coochbehar and Jalpaiguri district headquarters recorded 162 mm and 145 mm rainfall respectively, the weatherman said.

Skymet said a cyclonic circulation is likely to develop over the northeast Arabian Sea and trough from this circulation will extend up to North Central Maharashtra leading to increased rain over Konkan and Goa including Mumbai.

The rainfall activity is expected to increase over Mumbai and suburbs by Monday and good rains are expected to continue until July 16.

The civic commissioner in Maharashtra''s Thane said 79 buildings classified as "very dangerous" are being vacated in the city and the process would take two days.

"The monsoon has already set in, and we cannot take another risk as we are already fighting a battle against COVID-19," civic commissioner Vipin Sharma said.

In previous years, there have been incidents of building collapse in the city during the rainy season.

IMD has predicted that strong wind with speed up to 60 kmph is likely over southwest and westcentral Arabian Sea and advised fishermen to not venture into the sea in these areas.