The court also let off Congress leader Rahul Gandhi in a contempt case filed against him for wrongly attributing to the top court his "chowkidar chor hai" remark in Rafale case.

India has signed a Rs. 58,000 crore deal for purchase of 36 Rafale fighter jets.

The Supreme Court has dismissed review petitions seeking an investigation into the alleged irregularities into the Rs. 58,000 crore Rafale deal with French firm Dassault Aviation and giving the government a clean chit. "We don't feel it necessary to order an FIR or a roving inquiry into the Rafale deal case," a bench comprising outgoing Chief Justice of India Ranjan Gogoi, said while dismissing the petitions.

On May 10, the Supreme Court had reserved the decision on the petitions, including one by former union ministers Yashwant Sinha and Arun Shourie, along with activist-lawyer Prashant Bhushan, seeking a re-examination of its findings that there was no occasion to doubt the decision-making process in the procurement of 36 Rafale fighter jets. The petitioners claimed that the verdict was based on "multiple falsehoods and suppression of material and relevant information".

The court also let off Congress leader Rahul Gandhi in a contempt case filed against him for wrongly attributing to the top court his "chowkidar chor hai" remark in Rafale case against Prime Minister Narendra Modi. Rahul Gandhi had made the remarks on April 10, the day the top court had dismissed the Centre's preliminary objections over admissibility of certain documents for supporting the review petitions against the December 14 last year verdict in the Rafale case. Mr Gandhi, who was then the President of the Congress Party, had told the bench that he has already offered an unconditional apology for wrongly attributing the remarks relating to the Prime Minister to the top court.

Pointing to Mr Gandhi's "Chowkidar chor hai" slogan ahead of the Lok Sabha election, senior BJP leader and union minister Ravi Shankar Prasad said the Congress leader has not only called the Prime Minister a thief, but he lied about the former French Prime Minister's statements and misquoted the Supreme Court.

Here are the LIVE UPDATES on Rafale review petitions in Supreme Court :

Truth Has Triumphed: BJP After Rafale Verdict
The BJP on Thursday reacted with jubilation to the Supreme Court's decision to reject review petitions for probing the Rafale deal, saying truth has triumphed and that it is a huge victory for the Modi government."
Nov 14, 2019 13:47 (IST)
Congress and Rahul Gandhi should apologise to the country: Ravi Shankar Prasad 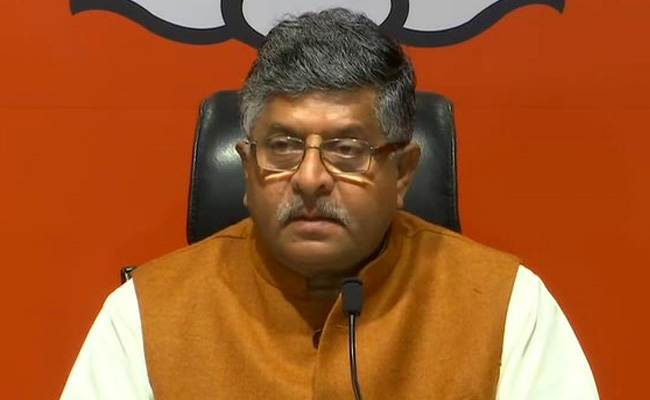 The allegation of corruption in Rafale deal was nothing but an attempt to malign the clean & honest image of PM Modi & his Govt.

The people of India will not forgive the Congress for their slanderous campaign and calumny. The Congress should apologise for misleading the people.

Nov 14, 2019 11:18 (IST)
Rafale case Live Updates: Top Court Dismisses Petitions Against Order Refusing CBI Probe
The top court has dismissed petitions seeking a review of its judgment refusing a CBI investigation into the Rafale fighter jet deal with French firm Dassault Aviation and giving the government a clean chit.
Nov 14, 2019 11:03 (IST)
Rahul Gandhi let off in defamation case
The court has also closed defamation case against Rahul Gandhi. "Rahul Gandhi should not have made political comments without reading the full order. In light of the affidavits, Mr Gandhi needs to be more careful in future. We do not want to continue proceedings any further" the Bench ordered.
BJP leader Meenakshi Lekhi had filed defamation case against Mr Gandhi for wrongly attributing to the top court his "chowkidar chor hai" remark in Rafale case against Prime Minister Narendra Modi.
Nov 14, 2019 11:01 (IST)
The Supreme Court has dismissed the review petitions seeking an investigation into the alleged irregularities in the Rs. 58,000 crore deal.
Nov 14, 2019 10:41 (IST)
A brief timeline of the Rafale jet deal case:
2007: The UPA government releases tenders for 126 fighters, based on the demand by the Indian Air Force.
January 2012: French company, Dassault Aviation makes the lowest bids for their aircraft Rafale. According to conditions, 126 jets required, of which 18 to be imported in fly-away condition. Hindustan Aeronautics Ltd (HAL) supposed to manufacture the remaining 108 jets with assistance from Dassault.
2014: HAL and Dassault sign an agreement. Negotiations carried out however the deal was not finalised.
June 2015: Defence ministry officially withdraws the 126 aircraft deal tender.
April 2015: Prime Minister Narendra Modi visits Paris and announces the decision to buy 36 Rafale fighters.
January 2016: French President Francois Hollande visits India on the occasion of Republic Day. A memorandum of understanding on the purchase of Rafale jets signed between India and France.
November 2018: A bench headed by Chief Justice of India Ranjan Gogoi reserves verdict in the Rafale case after extensive arguments.
December 14, 2018: Supreme Court dismissed petitions seeking court-monitored probe into Rafale fighter jet deal, saying that there was no occasion to doubt the decision-making process in the deal. The top court had also said that it was not its job to go into the issue of pricing of fighter planes.
May 2019: The Supreme Court reserves the order on the pleas filed by former Union ministers Yashwant Sinha, Arun Shourie, lawyer Prashant Bhushan and others against the top court''s judgment.
Nov 14, 2019 10:24 (IST)
The hearing in the case will hear the petitions at 10:40 am.
Nov 14, 2019 09:54 (IST)
On May 10, the top court had reserved the decision on the pleas, including one filed by former Union ministers Yashwant Sinha, Arun Shourie and activist lawyer Prashant Bhushan, seeking a re-examination of its findings in the procurement of 36 Rafale fighter jets.
Nov 14, 2019 09:53 (IST)
A three-judge bench headed by Chief Justice Ranjan Gogoi will deliver judgement on petitions seeking a review of its judgement giving a clean chit to the Modi government in the Rafale fighter jet deal with French firm Dassault Aviation. Other judges on the three-member bench are Justices SK Kaul and KM Joseph.