Rahul Gandhi had admitted earlier that he had misquoted the Supreme Court after its ruling on the Rafale deal and said he had done it as "rhetorical flourish in the heat of political campaigning". 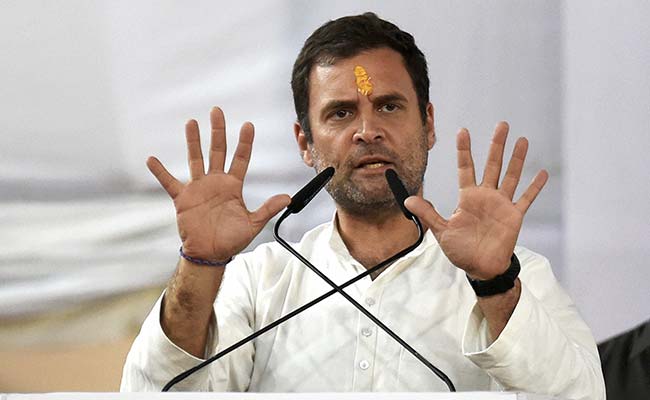 Rafale deal: Rahul Gandhi had expressed "regret" in his last affidavit to the Supreme Court as well.

Congress chief Rahul Gandhi, accused of being in contempt of court with his comments on the Rafale fighter jet deal, has reiterated his regret for suggesting that the Supreme Court had endorsed his sharpest political attack on Prime Minister Narendra Modi this election season. The 48-year-old leader on Monday filed his reply in the Supreme Court on the contempt notice issued to him following a case filed by BJP lawmaker Meenakshi Lekhi.

In his submission to a bench led by Chief Justice Ranjan Gogoi, Mr Gandhi adopted his earlier reply and said that the BJP was abusing the legal process to "gag" him from raising the Rafale issue. He has requested the Supreme Court to dismiss the contempt case with a fine.

Though it had excused him from a personal appearance, the Supreme Court had asked the Congress chief to explain by tomorrow why he should not be held in contempt for claiming that it had "accepted" his "chowkidar chor hai (the watchman is a thief)" slogan attacking PM Modi. PM Modi, who had given himself the moniker to stress his anti-corruption stance, has been accused of crony capitalism by Mr Gandhi in the deal for French-made Rafale jets. The BJP has vehemently denied the charge.

Last Monday, Mr Gandhi had said in an affidavit that he had falsely quoted the top court as "rhetorical flourish in the heat of political campaigning", without having seen, read or analysed the order. A day later, senior Congress leader Abhishek Manu Singhvi, acting as Mr Gandhi's lawyer, requested that the case be closed. As former Attorney General Mukul Rohatgi, arguing on behalf of the BJP, objected, Mr Singhvi pointed out that the court had "not issued notice" to his client but only asked for an explanation.

But it did not go as he had hoped.

"You are pointing out we have forgotten to issue notice. We will cure it by issuing notice," responded the bench led by Chief Justice Ranjan Gogoi.

Despite the setback, Mr Singhvi said the Congress chief's statements accusing PM Modi of corruption in the Rafale deal were a political diatribe. "'Chowkidar chor hai' is being used, has been and will continue to be used as a political campaign," the Congress leader said later, briefing the media outside.

On April 10, the court had ruled that classified documents accessed by the media can be used as evidence to consider requests to review its clean chit to the Rafale deal. Hours later, Rahul Gandhi cheered the order with the "chowkidar" slogan that has become central in the Congress attack on PM Modi.