Amarinder Singh said that government will shut the factories which do not follow regulations and norms. 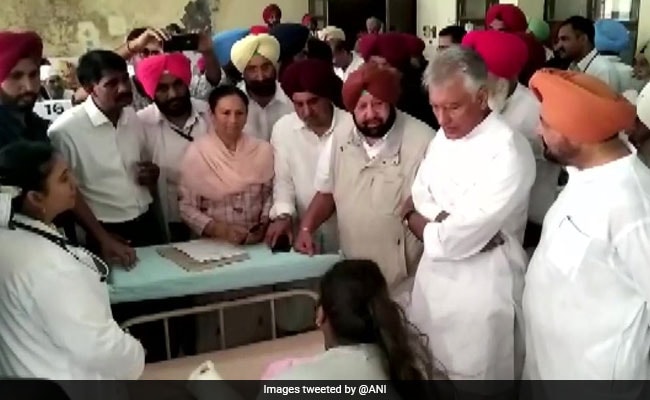 Amarinder Singh meets those injured in the firecracker factory blast.

Punjab Chief Minister Amarinder Singh today met the people who were injured in the fire that broke out in a firecrackers factory in Batala two days ago.

The Chief Minister also visited the site of the incident.

"It is an unfortunate incident. It is our duty to see that those who are injured get proper medication. We have visited the site where this incident happened. There has to be some system... Crackers factories should not be there in crowded areas. We will see why it was allowed," he said.

"I can assure you that I will put a committee headed by Chief Secretary and the Director General of Police, to check such factories in the state. We will shut the factories which do not follow regulations and norms. We will not allow these things to carry on," the Chief Minister added.

At least 23 people have lost their lives in a blast that took place at a firecracker factory in Punjab's Batala city on Wednesday.

Mr Singh had earlier ordered a magisterial inquiry in the accident and announced an ex-gratia grant of Rs 2 lakh for the relatives of those who died in the accident and Rs 50,000 for severely injured, who were referred to Amritsar Medical College. He has announced Rs 25,000 for those with minor injuries.

President Ram Nath Kovind, Prime Minister Narendra Modi and Congress leader Rahul Gandhi have expressed their condolences on the death of workers in the explosion.