Puducherry Floor Test: V Narayanasamy moved the motion seeking the confidence vote minutes after the Assembly met for a special one-day session, he and his ruling side MLAs later walked out before the motion was put for voting. 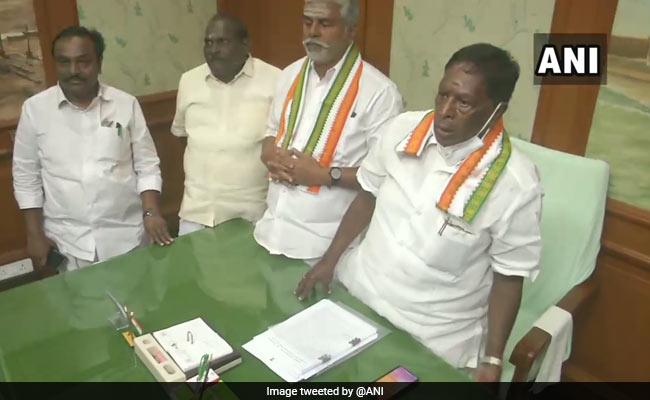 Puducherry Floor Test Updates: Congress government in the state has collapsed after losing its majority.

The Congress-led government in Puducherry lost the confidence vote sought by Chief Minister V Narayanasamy, in the face of its depleted strength of 11 against the opposition's 14 following resignation of ruling dispensation MLAs, including a DMK legislator.

Though Mr Narayanasamy moved the motion seeking the confidence vote minutes after the Assembly met for a special one-day session, he and his ruling side MLAs later walked out before the motion was put for voting.

Subsequently, Speaker VP Sivakolundhu declared that the motion stood defeated, even as it was said Mr Narayanasamy was headed to the Raj Nivas, possibly to meet Lt Governor Tamilisai Soundararajan.

Yesterday, two more MLAs resigned, plunging the coalition further into the crisis ahead of polls. Of the 30 elected MLAs in the assembly, Congress had 15 members and, along with the DMK's two and one independent, was just past the majority mark of 16. Six MLAs, however, resigned in the last few weeks.

The Congress has traditionally enjoyed a strong grip on Puducherry but this time round, it has faced rumblings over Chief Minister V Narayanasamy, seen to have been para-dropped after the 2016 election.

Four-time Congress MLA Lakshminarayanan while putting in his papers on Sunday said he is upset over not getting "recognition" in the party. He said he will leave the party too. A DMK MLA Venkatesan also resigned.

Last week, Puducherry also saw removal of Kiran Bedi as Lieutenant-Governor. For four-and-a-half years, Chief Minister V Narayanasamy campaigned for Kiran Bedi's removal but when it did happen, it was at a time his government looked shaky. The union territory's new Lieutenant Governor Tamilisai Soundararajan called the floor test on Monday citing the opposition's stand that the ruling party no longer has a majority.

Elections are due by May in Puducherry and neighbouring Tamil Nadu, besides Kerala, West Bengal and Assam. The BJP does not expect much from Tamil Nadu and Kerala at this point, but feels it has a better chance in Puducherry, with the Congress weakened.

Here are the Highlights on Puducherry Floor Test:

Feb 22, 2021 12:11 (IST)
Update| Puducherry Chief Minister V Narayanasamy accuses BJP, NR Congress of bringing down Congress government after resignation
Feb 22, 2021 11:30 (IST)
JustIn| Puducherry Chief Minister to submit his resignation after assembly speaker declares government has lost majority
Feb 22, 2021 11:23 (IST)
MLAs should stay loyal to their parties. Those who have resigned will not be able to face the people who voted for them; they will be called opportunists: Puducherry CM V Narayanasamy in the assembly during floor test. 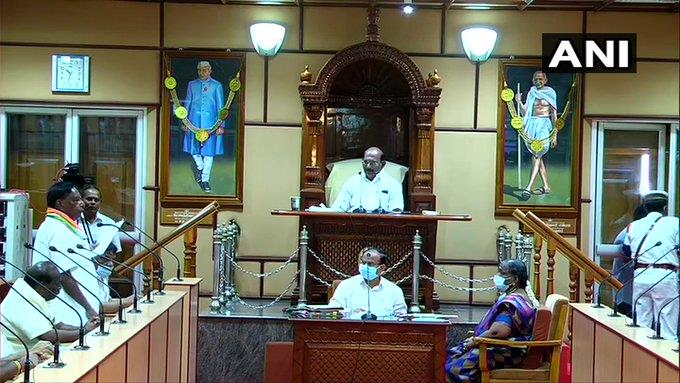 Former LG Kiran Bedi and Central Government colluded with the Opposition and tried to topple the government. As our MLAs stayed united we managed to pull off the last 5 yrs. The Centre has betrayed the people of Puducherry by not granting funds we requested: Puducherry CM pic.twitter.com/uRiwK5hkGD

Referring to former Lieutenant Governor Kiran Bedi being at loggerheads with him on administrative matters, he said that he had however, delivered for the union territory, including effectively handling the COVID-19 pandemic.
Feb 22, 2021 10:39 (IST)
It Is Clear That People Of Puducherry Trust Us: Chief Minister V Narayanasamy

We formed the government with the support of DMK and independent MLAs. After that, we faced various elections. We have won all the by-elections. It is clear that people of Puducherry trust us: Puducherry CM V.Narayanasamy in assembly pic.twitter.com/mrnsN2xxFh