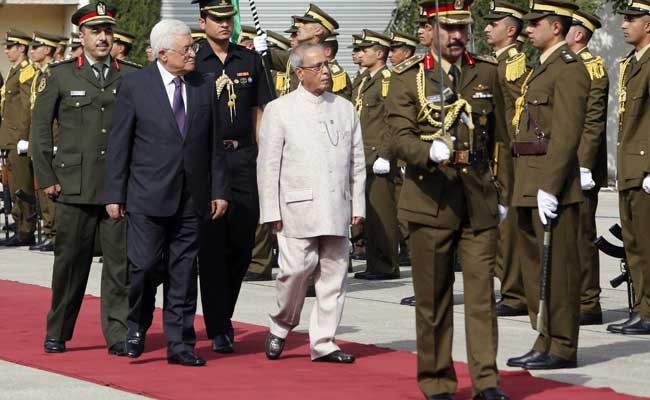 East Jerusalem: Palestinian students today protested against India's ties with Israel at a university campus in East Jerusalem even as President Pranab Mukherjee was being conferred an honorary degree.

Hundreds of students shouted slogans and carried placards critical of India's ties with the Jewish state while President Mukherjee was being honoured by Al-Quds university at Abu Dis and hailed as a "Knight of Peace".

Placards with slogans "India why do you cooperate with the occupiers (Israel)", "Indian President raise your voice against Israel's aggression", and "Indian President don't keep quiet against the butchers slaying Palestinians" were carried by the students as President Mukherjee was leaving the campus in East Jerusalem.

The demonstration came in the middle of heightened tensions and more killings between Israelis and Palestinians which have resulted in hundreds of casualties.

Inside the university auditorium, where Palestine Prime Minister Dr Rami Hamadallah President Mukherjee was among those present, Pranab Mukhkerjee was hailed as "a Knight of Peace" and loudly cheered when he mentioned all the help rendered by India to the Palestinians.

In his acceptance speech at the university, the President said peace and stability in the Middle East region is in India's interest and proposed a three-pillar framework to propel its "historic" ties with Palestine besides building a second Information Technology (IT) centre in Gaza.

President Mukherjee, who is in Palestine in the first-ever State visit by an Indian President, also announced an increase in Indian Technical and Economic Cooperation(ITEC) scholarship programme slots for Palestine to 100 per annum and setting up of an India-Chair at the Al-Quds University.

On Sunday, the President was conferred with an honorary degree in political science  by the University of Jordan in Amman. On Thursday, he will be conferred a honorary doctorate by the Hebrew University in Israel.

President Mukherjee delivered the speech after the inauguration of India-Palestine Centre for Excellence in Information and Communications Technology(ICT) in Al-Quds University.

"India will build a similar Center in Gaza. We look forward to the success of the Techno-Park in Ramallah. It will be jointly built and operated by the Palestine Investment Fund and the Indian public and private sector," he added.

President Mukherjee said this will have a satellite centre in Ramallah and forward linkages with industry.

The President also gifted to the IT Centre of Al-Quds University 30 computers from India without the sophisticated communication equipment, which was held by the Israeli customs on grounds of security. India plans to replace the communication equipment not permitted by Israel with frequencies acceptable to Israel.

The President said the conferment of the doctorate on him was a sign of friendship and regard of the people of Palestine for India and for him.

He told the assembled audience that the university's pursuit of scientific knowledge and advanced research placed it at the centre of Palestine's national development programme.

President Mukherjee said "India shares the perception that the Palestinian issue is at the centre of Arab-Israeli conflict.

Peace and stability in the region is in India's interest."

Noting that the speed with which an event happening in one place of the world triggers a response in another is unprecedented in terms of its impact and scale, the President said maintaining regular contacts at all levels is, therefore, important.

Stating that India has always been at the forefront in promoting the Palestinian cause, the President said the strong foundations in this regard and shared belief in peace, prosperity and development for the people of Palestine "propel us to do more."

He referred to India's backing to several UN resolutions on Palestine to show its solidarity with the Palestinian people.

President Mukherjee said one of the aims of his visit to Palestine is to suggest a framework for the future of India's relationship with it.

Noting that India continues to follow its traditional policy on Palestine, the President said the framework of their partnership can be reinforced through three principal pillars.

The President congratulated the people of Palestine on the momentous unfurling of their national flag at the United Nations-for the first time in history-on September 30, 2015.

Apart from our bilateral trade in goods, the President said there is vast scope for trade in services.

"India's strength in IT and IT-enabled services as well as consultancy can pave the way for  greater engagement in the IT sector," he added.

The President also said that Government of India's 'Make in India' scheme welcomes Palestinians to manufacture in India.