According to the Uttar Pradesh unit president of the IMA, Dr Ashok Rai, there are 21,500 private hospitals, pathologies, diagnostic centres and private doctors in the state who are observing the strike. 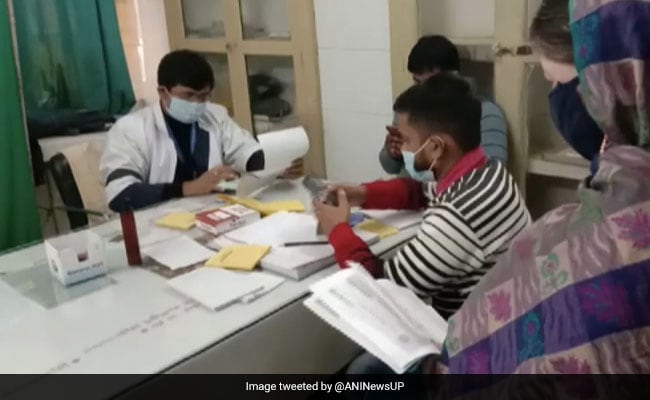 Doctors at Motilal Nehru Divisional Hospital wear black bands as a sign of protest in Prayagraj.

Private hospitals, nursing homes and diagnostic centres in Uttar Pradesh on Friday, extended support to the strike called by the Indian Medical Association (IMA) against the centre's move allowing post graduate practitioners of Ayurveda to be trained in performing surgical procedures.

Emergency services and treatment of COVID-19 patients have been exempted from the strike.

Government doctors are not a part of the strike.

According to the Uttar Pradesh unit president of the IMA, Dr Ashok Rai, there are 21,500 private hospitals, pathologies, diagnostic centres and private doctors in the state who are observing the strike.

During this period, only treatment of COVID-19 patients and emergency services will remain functional, he said, adding that Indian Dental Association has also extended its support to the IMA.

Elaborating on the reasons for observing the strike, Dr Rai said Ayush doctors have been given permission to conduct surgeries after taking a bridge course.

As of now, allopathic, ayurveda, Unani and homeopathy have their different identities and mixing them to create ''mixopathy'' would have serious repercussions, he said.

IMA office bearers will hold demonstrations in all the districts of the state and hand over memorandum addressed to the prime minister through respective district magistrates demanding withdrawal of this decision, he said.

The president of Lucknow unit of IMA, Dr Rama Srivastava, said there are 271 nursing homes and private hospitals in the state capital besides 6800 private doctors, 350 diagnostic centres and pathologies where this strike is being observed today .

All government hospitals in Lucknow have been alerted in view of the strike, a government spokesman said.

KGMU, SGPGI and Lohia hospitals have been asked to keep their services including Outpatient Department (OPD) and emergency on alert.

The Central Council of Indian Medicine (CCIM) had issued a notification authorising post-graduate practitioners in specified streams of Ayurveda to be trained to perform general surgical procedures.

Rahul Gandhi On Uttarakhand Resort Murder: "Only Reason She Is Dead Is..."