PM Will Break Congress Record, BJP Will Be In Power Till 2047: Ram Madhav 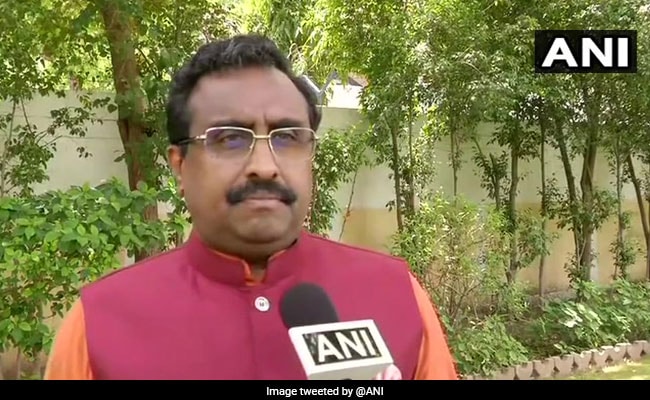 BJP national general secretary Ram Madhav on Friday made a series of bold claims about the future of the country and the longevity of the PM Modi-led government. He claimed the Prime Minister, who has in the past repeatedly compared the Congress to a dynasty ruled by the Gandhi family, would lead the party in breaking the opposition's "record" of years in power, and said "there will be BJP in power till we enter 100th year of independence" in 2047.

Addressing a rally in Tripura, Mr Madhav also claimed "nationalism is in the DNA of BJP" and lavished praise on voters in the state for choosing Prime Minister Narendra Modi who, he claimed, would make a "new India where there will be no homelessness, joblessness will end".

"If there is any party which has been in power for the longest duration it is Congress, it was Congress which ruled the country after Independence from 1950 to 1977. I assure you that Modi-ji is going to break that record. There will be BJP in power till the time we enter 100th year of independence in 2047," Ram Madhav said.

"Nationalism is in the DNA of BJP, it is BJP's identity. Whether elections are going on or not, BJP means nationalism, nationalism means BJP," he added.

PM Modi, who was sworn-in for a second term on May 30, led the BJP to a spectacular win in the recently concluded general election. The party won 303 of 542 seats polled to claim an outright majority and won both Lok Sabha seats from Tripura. The BJP also won 36 of 60 seats in Assembly polls in Tripura last year to extend its influence across North East India.

"Modi-ji''s BJP is the present of this country, the future will also be Modi-ji''s BJP. In 2022, we will make a new India where there will be no homelessness, joblessness will end. In 2047 on the centenary of independence, India will stand as a 'vishwa guru'," Mr Madhav said.

However, the newly sworn-in government has a fight on its hands to meet one of Mr Madhav's promises - the Ministry of Statistics last week confirmed unemployment figures were at a 45-year-low. The Prime Minister is planning to set up cabinet committees to tackle the slowing economy and rising unemployment. PM Modi will lead both groups, which will also include Home Minister Amit Shah.

PM Modi was today in Kerala to visit the famous Guruvayur temple before heading to the Maldives, which will be his first overseas visit in his second term as Prime Minister.