President Ram Nath Kovind today visited the Statue of Unity in the Narmada district of Gujarat on the death anniversary of Sardar Vallabhbhai Patel. 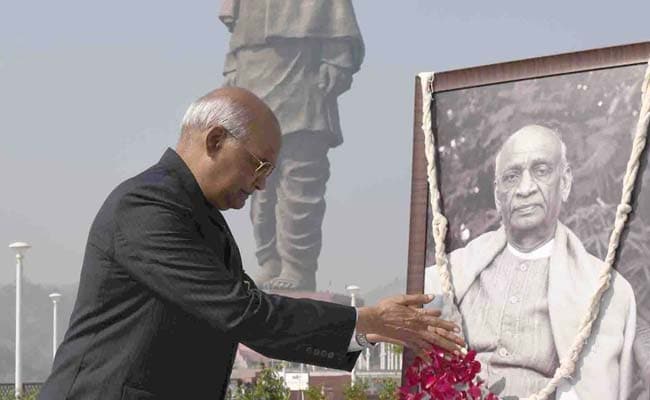 President Ram Nath Kovind today visited the Statue of Unity in the Narmada district of Gujarat on the death anniversary of Sardar Vallabhbhai Patel. President Kovind, accompanied by Gujarat Chief Minister Vijay Rupani and state chief secretary JN Singh, began his visit with a stroll at the Valley of Flowers developed near the 182-metre tall statue of Sardar Patel in Kevadiya.

After planting a tree in memory of Sardar Patel, President Kovind attended a prayer meet at the statue complex.

After offering tributes to Sardar Patel, President Kovind visited the museum and exhibition area beneath the statue. He also visited the viewing gallery located at a height of 132 metres inside the statue.

President Kovind then left the statue premises and headed to Kevadiya village, around 5 kms from the statue, to lay the foundation stone for a railway station.

The railway station, proposed to be built at a cost of Rs 20 crore, is aimed at providing direct rail connectivity to tourists visiting the Statue of Unity.

To connect Kevadiya with the main broad-guage line, the Railways has sanctioned the work to convert 18-km Dabhoi-Chandod narrow gauge into broad gauge and extension from Chandod to Kevadia by constructing a new 32-km line.