Read inOther Languages
This Article is From Mar 28, 2020

Prakash Javadekar faced criticism over the government's abrupt announcement of the lockdown that has left millions stranded and triggered panic about access to food and basic necessities. 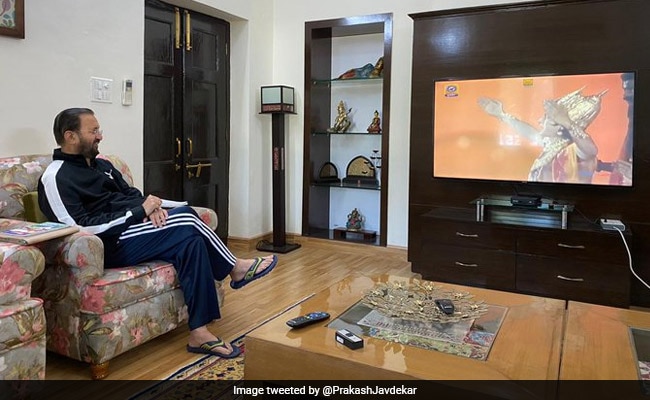 Prakash Javadekar tweeted a photo of him watching the Ramayan in his living room.

Union Minister Prakash Javadekar on Saturday shared a photo of him watching the Ramayan on television but soon deleted his tweet and posted a new one that showed him working amid mounting criticism.

National broadcaster Doordarshan on Saturday began a repeat airing of its wildly popular Indian epics Ramayan and Mahabharat amid the 21-day national lockdown because of the coronavirus pandemic. The mythological shows that aired in late 80s and 90s attained cult status, amassing unprecedented viewership.

At 9:41 am, Mr Javadekar, the Union Minister Information and Broadcasting, posted a photo of himself watching the Ramayan on DD National. But faced with an overwhelming stream of criticism stemming from the government's abrupt announcement of the lockdown that has left millions stranded and triggered panic about access to food and basic necessities, he deleted the post.

I am sleeping without food and you hello javadekar same on you pic.twitter.com/To8MVV6myo

Prakash Javadekar seems to have deleted this tweet.
He must have received an angry call from Modi - "Yaar, I said people must be provided with adequate cereals. CEREALS. Not serials." #Ramayanpic.twitter.com/3WsHeKT2wQ

The minister later posted a photo of himself working from his home.

Home has become office ! Connecting and coordinating with Officers of my Ministries for facilitation during the lockdown!#StayHomeStaySafe#IndiaFightsCorona#WashYourHandspic.twitter.com/NHM4bInUr5

But the follow up tweet by Mr Javadekar, who also happens to be in-charge of the Ministry for Environment, Forest and Climate Change and the Ministry for Heavy Industries and Public Enterprises, also angered many.

Coverup. Who are you fooling Mr Javadekar? You are spreading more rayeta by unsuccessfully trying to cover up. https://t.co/odJzUPLms6

Hope prakash javadekar ji will get this pic.twitter.com/yTbc1b7tfd

The government has faced sharp criticism for its implementation of the lockdown that came two months after the global outbreak of coronavirus but has still led to a major crisis, especially for migrant workers and people who live on daily incomes.

To stop the spread of the highly-contagious COVID-19 disease, the government has banned all activity except essential ones and asked people to stay at home to observe social distancing.

With all public transport stopped, many left without food, shelter and income have been forced to undertake journeys for hundreds of kilometres on foot.

While the government has announced relief measures, it is yet to reach hundreds of thousands who are worst affected.

Broadcasting the Ramayan and Mahabharathave been seen as a way to boost public morale amid the unprecedented crisis.