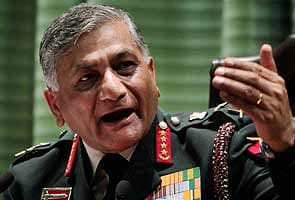 New Delhi: The chief of the Indian Army, General VK Singh, may have skidded past the point of no-return on his collision course with the government. A letter from him to the Prime Minister, warning that India's security is at risk, has been leaked to the media.

Opposition parties in Parliament demanded that the government take action against whoever is responsible, expressing as much concern over the leak of the letter as its contents.

Many blame the Army chief, suggesting that this is his latest attempt to embarrass the Defence Ministry. A series of leaders from opposition parties, including Lalu Prasad Yadav, said the Army chief should be removed for breaching confidentiality and compromising institutional integrity. (Read: Some leaders ask for Army chief's removal - 10 big facts)

In his letter, dated March 12, General VK Singh asks the Prime Minister to "pass suitable directions to enhance the preparedness of the Army". The chief describes the state of artillery, air defence, and infantry as "alarming." He writes the Army's tanks are "devoid of critical ammunition to defeat enemy tanks" and air defence is "97% obsolete."

In Parliament, Defence Minister AK Antony described the letter as "top-secret." He said publishing "secret communication within government cannot serve our national security" - a thinly-veiled indictment of General Singh. In fact, another Union minister, Vayalar Ravi, said that the episode reflected the "frustrations" of an individual, who had to withdraw his petition on the age row in the Supreme Court. (Read: Army chief a frustrated man, says Union minister Vayalar Ravi)

The details of the Army's weaknesses and its chasm with the government are now part of the imagery on display for Chinese President Hu Jintao, who is in Delhi for the BRICS (Brazil, Russia, India, China and South Africa) summit that begins tomorrow. On Monday, the Army chief revealed that he had been offered a bribe of 14 crores to clear sub-standard trucks in 2010. The Defence Minister retorted yesterday that he had asked the chief to take action against the retired defence officer who offered him the kickback, but the Army chief had refused.

The skirmish over the bribe has been eclipsed by the Army chief's letter. Many Opposition leaders said the person responsible for the leak must be identified and punished. "Responsibility will have to be fixed and action be taken, irrespective of the position they may hold in the defence forces or the civilian administration. And that assurance must be given, and that is what we want," said the Left's Sitaram Yechury.

Ram Gopal Yadav of the Samajwadi Party and Shivanand Tewari of the Janta Dal (United) agreed.  But Arun Jaitley of the BJP pointed out that alleged lapses in the procurement of equipment, as highlighted by the army chief, should be addressed urgently, though privately.

Former army chief Shankar Roy Chowdhury said that the government has been alerted repeatedly to the exigent need to upgrade the army's resources. "This is not a new thing...it is occupying media space because of the leaks," he said. "Pakistan must be laughing... rest assured Pakistan knows about it, China knows about it," he added.

The army chief is set to retire at the end of May. Many believe that this week's developments suggest he is hungry for revenge before he exits office. (Read: Months of acrimony for army chief and the government)

For most of last year, the minister and the Army chief fought a long battle over General Singh's age. The government refused to accept that General Singh was born in 1951 and not 1950.

Records with the Army show both years, but the government said that documents used to establish his seniority and promotions declared 1950 as his year of birth and could not be amended. The Army chief took the unprecedented action of taking the government to court. But he dropped his petition after Supreme Court judges indicated they were unlikely to accept his arguments.
Comments
Army ChiefGeneral VK Singh14 crore bribe offerArmy chief bribedArmy chief Parliament