"There was a big threat perception here (in Kochi) on the day of the prime minister's visit... There was a terror module here during his visit," Kerala police chief T P Senkumar said. 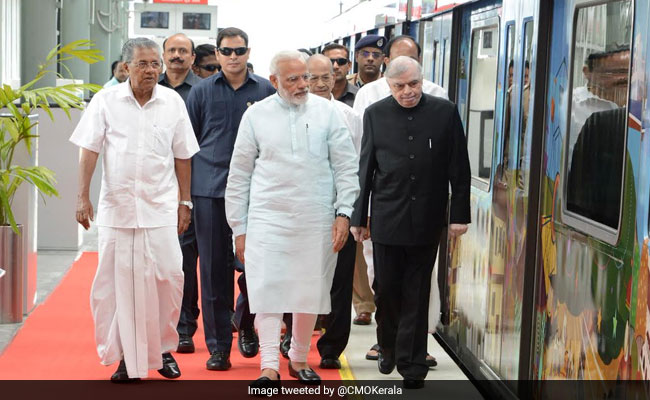 "There was a big threat perception here on the day of the prime minister's visit (on Saturday).. There was a terror module here during his visit. We cannot disclose much of its details," Mr Senkumar told reporters in Kochi.

Asked about the 'terror threat,' Mr Senkumar said he could not elaborate further.

The Kerala director general of police said this while justifying police action on Friday near the Kerala High Court against people who were protesting against an LPG terminal coming up at Puthuvype near Kochi.

He defended Kochi's City Deputy Commissioner of Police Yatish Chandra who reportedly used force to remove protesters in the high court area on that day.

"They (the protesters), all of a sudden, tried to create trouble on the route the prime minister's motorcade was to take (on June 17)," the DGP said, adding it happened when the Special Protection Group (SPG) and other security agencies were conducting a trial run through the route.

PM Modi had visited Kochi amid tight security on Saturday to dedicate the first phase of the Kochi Metro to the nation and also had taken a brief ride on the metro train along with dignitaries including Governor P Sathasivam , Union Minister M Venkaiah Naidu and Chief Minister Pinarayi Vijayan.

The police chief said the protest was staged without prior notice and justified the police action.

Mr Senkumar dismissed the allegations against Yatish Chandra that he had ordered lathicharge against the protesters at Puthuvype on Sunday.

"Can you show me the visuals of his action," he asked reporters.

He reiterated the police charge that extremist forces were behind the anti-LNG terminal protest.

"Yes, extremist forces are behind the protest," he said justifying the lathicharge.

His statement comes amid demand from the opposition parties and protesters for stringent action against the police for the lathicharge.

At least 20 people were injured in the lathicharge.

Amid Rise In Cases, COVID-19 Triggers Political Skirmishes In Bengal