"Can You Identify That Great City?" See PM Modi's Reply On Twitter

The city in the photograph was Uttar Pradesh's Kashi and the temple was Ratneshwar Temple, Prime Minister Narendra Modi tweeted. 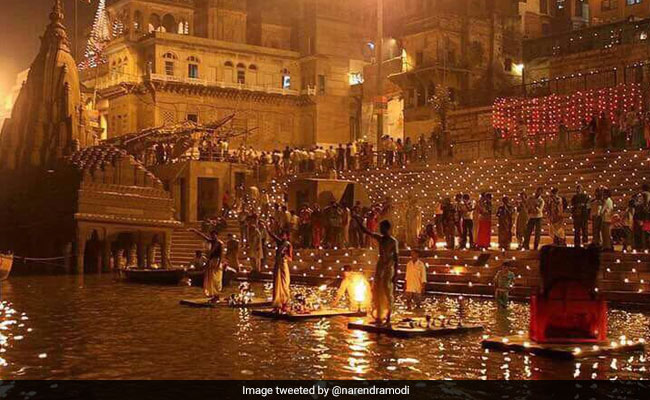 An illuminated riverbank, a grand temple, scores of people and rituals featured in a photograph shared by a Twitter account. However, there was a question with the beautiful photo. "Can you identify that great city?" asked the account called Lost Temples. There was an answer soon from Prime Minister Narendra Modi who correctly identified not only the city but also the temple.

The city in the photograph was Uttar Pradesh's Kashi and the temple was Ratneshwar Temple, the prime minister tweeted.

"I surely can. Had shared this picture a few years ago. This is Kashi's Ratneshwar Mahadev Temple, in its full glory," PM Modi wrote and shared his old tweet where he had tweeted the photos. Varanasi, also known as Kashi, is PM Modi's constituency.

The account Lost Temples had shared a quote from American author Mark Twain on ancient India with the photograph.

Had shared this picture a few years ago.

This is Kashi's Ratneshwar Mahadev Temple, in its full glory. https://t.co/xp3u9iF1rHhttps://t.co/7NkPccOeYj

PM Modi, who follows the Lost Temples account, had shared maginificent photos of Kashi in 2017 from the Dev Deepawali festival.

Wonderful Dev Deepawali photos from Kashi! Have a look. pic.twitter.com/IjQXR52EHr

The Prime Minister's tweet was liked thousands of times within minutes.

Many on Twitter had also replied to the question correctly and identified the city as Kashi or Varanasi.