Rahul Gandhi went on to anticipate that if the mandis are shut lakhs of people employed in the procurement yards would be left jobless. 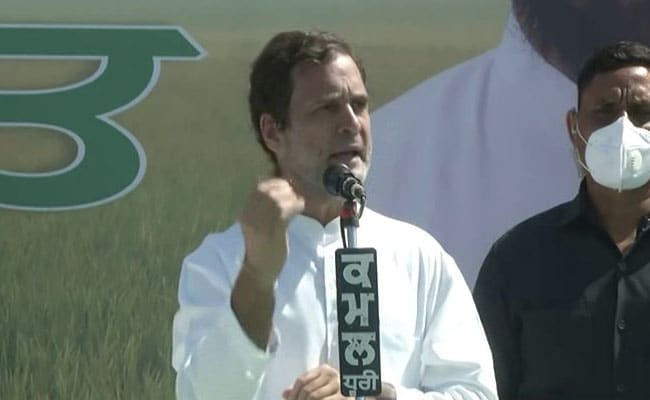 Accepting that there are shortcomings in the mandi system, Public Distribution System (PDS) and the Minimum Support Price (MSP), Congress leader Rahul Gandhi on Monday alleged that Prime Minister Narendra Modi, instead of resolving them, is "killing" the farmers with the new farm laws.

While speaking on the second day of the Congress' Kisan rally at Sangrur in Punjab on Monday, he went on to anticipate that if the mandis are shut lakhs of people employed in the procurement yards would be left jobless.

"We accept that there are loopholes in the system involving mandis (procurement yard), PDS and MSP; it needs to be strengthened. But Narendra Modi is not doing anything to improve that system; he's destroying that... With the farm bills (now Acts), he's killing the farmers," Rahul said.

It is to be noted that the central government has clarified that there are no provisions of scrapping the mandi or MSP system in the three new agricultural laws -- The Farmers' Produce Trade and Commerce (Promotion and Facilitation) Act, 2020, The Farmers (Empowerment and Protection) Agreement of Price Assurance and Farm Services Act, 2020, and The Essential Commodities (Amendment) Act, 2020.

Rahul added that the Centre has been attacking poor people, workers and farmers one after another for the last six years after Modi came to power in New Delhi. "None of their policies is helping the poor people, all are for their three-four friends," Mr Gandhi said, raising the issues of demonetisation and the Goods and Services Tax (GST) as well.

"Modiji said demonetisation would be an attack on black money. But nothing happened; the people put their money in banks and it was used by Modiji to waive off loans of five-six rich people in the country," he alleged.

He further criticised the GST and said that it, combined with the demonetisation, severely affected the small and medium businessmen in the country.

"I stand for the whole of India... These three (agricultural) laws are against the country, therefore, we are not going to step back," Rahul said, adding that the farmers will continue taking to the streets and speaking up against it despite the coronavirus crisis.

Punjab Chief Minister Captain Amarinder Singh, along with other leaders, were present at the rally held on Monday.