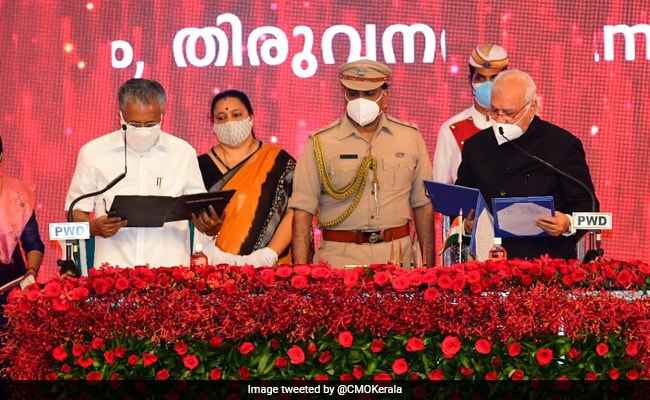 Weathering many a storm, ''captain'' Pinarayi Vijayan steered the Left ship to safe waters in the 2021 assembly elections with a thumping win and rewrote Kerala's political history of voters swinging between the Congress and Communists once in five years. Breaking the four-decade old trend of Keralites choosing between the rival fronts every five years, the 77-year-old has also affirmed his grip on the party, virtually becoming its face, something new in the Left scheme of things.

Unshakeable politician, shrewd strategist, ''double-breasted'' comrade, pragmatic administrator, crisis manager - Pinarayi Vijayan may have earned a volley of epithets but will certainly go down in Kerala's history as the man who led the Left dominance in the state despite facing political storms and natural calamities.

Leading LDF to victory in 99 out of 141 seats, Pinarayi Vijayan's supremacy in the party and the government has become total and he has once again established himself as the most towering and unquestionable Left leader in the state.

Not just political observers but even his critics now praise Pinarayi Vijayan for his ''able'' leadership and timely political strategies, which are considered as major factors that have helped the Left front government ensure continuity of rule.

Though Pinarayi Vijayan was not as popular as former Chief Minister and Left stalwart VS Achuthanandan among commoners and grassroot level party workers during the initial period, he, however, made use of every single opportunity to leave his imprint in the minds of people in the last five years.

Whether it was anti-CAA protests, the two devastating floods, cyclone Okhi, Nipah virus or the latest Covid-19 pandemic, Pinarayi Vijayan, seen as a hard taskmaster and a man of few words, succeeded in projecting himself as the ''leader fighting for the state's cause'', cutting across party lines. During the election campaign, there was an attempt by his hardcore followers to call him by the nickname "captain", which raised many eyebrows as even many Left sympathisers felt that the Marxist party had no tradition of projecting any individual as its face.

The shrewd strategist that he is, Pinarayi Vijayan turned brickbats into bouquets when some political opponents called him by his caste name to evoke pride among the politically dominant Thiyya community, to which he belongs. He comes from a poor toddy tapper's family in politically volatile Kannur, the birth place of the communist movement in the southern state.

A CPI (M) politburo member, Pinarayi Vijayan ensured there was not even a single voice of dissent against him either within the government or the party throughout the period, which had earned him the nickname of ''dictator'' on many occasions. But, it was not a cakewalk for him, both as an administrator and politician in these years as the opposition attacked his government with a plethora of corruption charges, especially targeting his office.

For the first time in the history of the state, the Chief Minister's office came under a cloud in the gold smuggling and the Dollar smuggling cases, and his confidante and former principal secretary M Sivasankar was arrested by the central agencies probing the cases. Whether it was the gold smuggling case, sprinkler deal, deep sea fishing pact or accusations against the police and home department, the Kannur strongman remained unfazed and dared his rivals to prove the charges.

His biggest test came in 2018 in the Sabarimala women's entry issue when Pinarayi Vijayan, going by the gender equality principles of his party, decided to implement the Supreme Court verdict permitting women of all age groups at the hill shrine and had to face the worst political and personal attacks of his life. The ruling dispensation suffered a big jolt in the 2019 Lok Sabha polls as it suffered the worst drubbing by losing 19 of the 20 seats to arch rival Congress-led UDF, seen as an indicator of people's mood then vis-a-vis the Sabarimala issue.

Interestingly, even though the party leadership was ready to soften its position on the women's entry issue, Pinarayi Vijayan stuck to his stand. However, the Left returned to winning ways in the 2020 local body polls, even as the bloc, led by Pinarayi Vijayan, steamrolled the Congress and BJP, which drew a blank in the April 6 polls. Whenever the opposition BJP and Congress attacked him with corruption charges, Pinarayi Vijayan, also the longest-serving CPI(M) state secretary, answered with a handful of development and welfare programmes implemented by his government, which silenced his opponents on many occasions.

Even his critics admit that Pinarayi Vijayan, as a stubborn administrator, had made long-pending projects, including the Kochi-Mangaluru GAIL pipeline and the development of national highway, become a reality in the state. He earlier had a short stint as the state's power minister during 1996-98 before taking over the party reins. During his period as state secretary, the in-fighting in the party between Pinarayi Vijayan and his bete noire Achuthanandan came to the fore.

Pinarayi Vijayan was suspended from the Politburo in 2007, along with Achuthanandan, after the two openly criticised each other through the media. Later, they were reinstated. However, Achuthanandan was again dropped from the highest party body for breaching party discipline. During his tenure, the state witnessed a giant leap in power generation and distribution capacity due to the productive measures taken by him as a minister.

Pinarayi Vijayan was born in 1944 to Mundayil Koran and Kalyani in Pinarayi in Kannur. He became the Kannur district secretary of the Kerala Students Federation while studying BA (Economics) in Brennen College in Thalassery and also worked as a handloom weaver after his schooling for a year before being able to continue his higher studies. He went on to become its state secretary and, later, state president of the KSF.