Under the constitution, a neutral caretaker government is responsible for holding fair and free elections through the Election Commission of Pakistan. 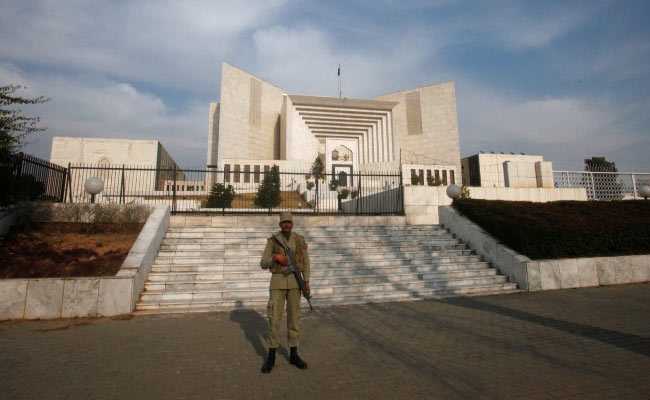 Pakistan's Supreme Court on Monday adjourned the hearing by a day but promised to give a "reasonable order" in the high-profile case about the rejection of a no-confidence motion by the deputy speaker of the National Assembly and the subsequent dissolution of Parliament.

President Alvi, the Supreme Court Bar Association and all political parties have been made respondents in the case.

Lawyers from the government and opposition presented their argument regarding the ruling by the deputy speaker.

During the arguments, the Chief Justice Bandial said that even if the speaker of the National Assembly cites Article 5 of the Constitution, the no-confidence motion cannot be rejected, Geo News reported.

If Khan gets a favourable ruling, elections will take place within 90 days. If the court rules against the deputy speaker, the parliament will reconvene and hold the no-confidence vote against Khan, experts said.

Chief Justice Bandial had earlier in the day said the court would issue a "reasonable order" today on the issue.

Justice Bandial observed that a debate before voting on the no-confidence motion had been clearly mentioned in the law but didn't take place.

Meanwhile, Justice Akhtar expressed dubiousness over the deputy speaker's constitutional authority to pass such a ruling, the paper said.

In my opinion, he said, only the speaker had the right to pass the ruling. "The deputy speaker chairs the session on the non-availability of the speaker." Justice Bandial also observed that the deputy speaker's ruling mentioned the meeting of the parliamentary committee for security. "The opposition deliberately didn't attend the meeting," he said.

Farooq H Naek, who was representing the joint opposition, pleaded the court to issue a verdict on the matter today.

But Justice Ahsan said it was impossible to pass the verdict today, adding that the court's decision will have far reaching outcomes.

"We can't pass a decision in the air," Justice Bandial said, adjourning the hearing till 12pm on Tuesday.

He also rejected the opposition's plea for a full bench.

"The court will hear all representatives of the parties before concluding the hearing," the chief justice said during the hearing.

On Sunday, after a brief hearing the court issued a written order, which said the court would like to "examine whether such an action (dismissal of the no-trust motion on the basis of Article 5) is protected by the ouster (removal from the court's jurisdiction) contained in Article 69 of the Constitution." The court intervened after the opposition bid to remove Prime Minister Khan through no-confidence on Sunday was scuttled by deputy speaker Suri.

The government of Imran Khan had vowed to oppose the court action on the plea that under Article 69, which says that proceedings of parliament cannot be called in question by any court.

The opposition termed the deputy speaker ruling as violation of the constitution which it contended was open for challenge in the Supreme Court.

The decision of the court would also determine the legality of the presidential order to dissolve the National Assembly.

After the no-confidence issue was rejected, Prime Minister Khan advised the president to dissolve the parliament and call a fresh election, who followed it and by the evening both the National Assembly and the cabinet ceased to exist.

However, opposition parties rejected both the ruling of deputy speaker and dissolution of the parliament, and not only challenged it in the court but also fought tooth and nail outside the Supreme Court.

He rejected the conspiracy to topple Khan, saying if there really was an international letter, then why the Speaker of the National Assembly accepted the voting on the no-confidence motion.

"No-confidence motion is a democratic way to oust the Prime Minister and we will continue to defend the constitution,” he said.

Meanwhile, according to a notification issued by President Alvi's office, Khan will continue to serve as the prime minister of Pakistan till the appointment of a caretaker premier under Article 224-A(4) of the Constitution.

The announcement came after President Alvi sent letters to Prime Minister Khan and Leader of the Opposition Shehbaz Sharif on Monday seeking suggestions for the appointment of a caretaker prime minister.

Under the constitution, a neutral caretaker government is responsible for holding fair and free elections through the Election Commission of Pakistan.