"Ordinary Citizen, Like You": Railway Minister Seeks Feedback On Train

Railway Minister Ashwini Vaishaw is on a four-day visit to Odisha as part of the BJP's Jan Ashirwad Yatra. 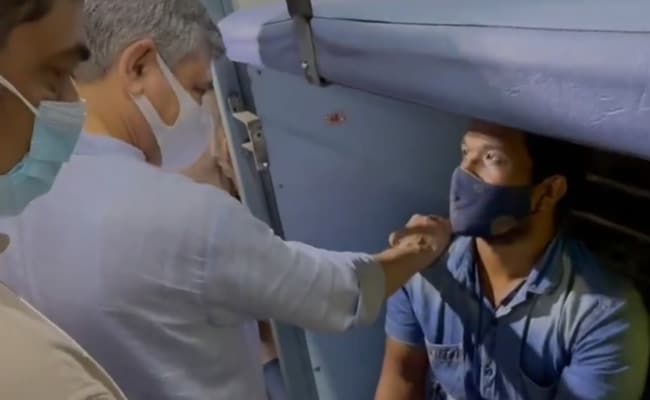 Passengers on an overnight train from Bhubaneswar to Rayagada on Thursday were in for a surprise when Railway Minister Ashwini Vaishnaw went from one compartment to the other, seeking their feedback on rail services and hygiene.

The former IAS officer, who was entrusted with the Railways portfolio and other responsibilities in the Union Cabinet expansion last month, is on a four-day visit to Odisha as part of the BJP's Jan Ashirwad Yatra. He boarded an overnight train from Bhubaneswar to Rayagada Thursday.

In one of the visuals that have emerged on social media, the minister can be seen speaking to a passenger in Odia. He asks the passenger where he works and then asks if the train is clean. The passenger responds that it is and the minister pats him on the shoulder before moving on.

In another visual, he is seen speaking to some more passengers. "Prime Minister Narendra Modi gave Odisha a Railway Minister for the first time," he is heard telling the passengers. He then adds that the Prime Minister has a vision and he will get all basic work done.

In a visual shared by the Railway Minister in a Twitter post, he can be seen sitting and chatting with fellow passengers. "It was very nice to meet you, young people," he tells them.

A woman passenger says it was a "great opportunity". "We never thought we can meet with you people," she says. To this, the minister replies in Hindi, "Hum toh dekho aap hi ke jaise hain, sadharan nagrik hain (We are ordinary citizens, just like you)". He then tells the passengers that his children are of their age. "Aaj miss kar raha tha, apne baccho se nahin mil paya toh aapse mil liya," he says.

Another video clip shared by the minister shows him looking at a map and discussing projects with others. "Reviewed various Railways projects in Odisha while en route to Rayagada on an overnight train journey," he tweeted.

Earlier, he inspected passenger facilities and hygiene arrangements at the Bhubaneswar railway station.

Mr Vaishnaw worked in various parts of Odisha as an IAS officer and now represents the state in Rajya Sabha.