The day also marked a campaign #HumWapasAayenge on social media by the community, that is pledging to return home after 30 years in exile. 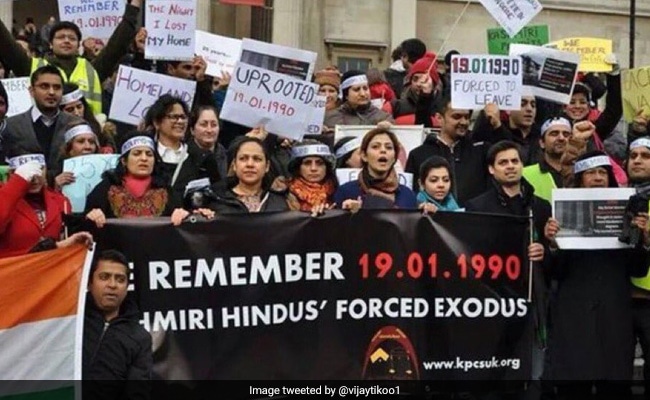 The displaced community, who had to flee from Kashmir, organised a sit-in in Jammu

21-year-old Ritik Jotshi was among a group of Kashmiri Pandits who joined a peaceful sit-in outside Raj Bhavan in Jammu on Sunday to mark the completion of their 30 years in exile.

The protest was part of the "Holocaust Day" which is being observed by the displaced community who were forced to flee from Kashmir to Jammu and other states in the early 90s soon after the outbreak of militancy.

Chanting high pitch slogans in support of the demand for their return and rehabilitation in the valley, Ritik Jotshi, whose family migrated from their ancestral Brahman Mohalla village in Anantnag district of south Kashmir, is hopeful that he will make it back to his village with dignity.

"This is for the first time that I am joining the protest here. We want the government to come up with a roadmap for our return and rehabilitation in the valley without further delay," he told PTI.

Ritik Jotshi said he had visited his ancestral village for a few days after his birth in Jammu but "the desire in my heart to live in my land remains alive."

"The government needs to look into the plight of Kashmiri Pandits on humanitarian grounds and ensure our return and rehabilitation," he said.

Joining him in highlighting the demand, Akash Pandit of Shopian and Amit Koul of Ashmuqam, who were also in their 20s, said the community wants justice as successive governments have only made promises and done nothing concrete to ensure their return to the land of their ancestors.

Sunandan Handoo, another youth, however, demanded a probe commission to look into the atrocities on the community leading to their exodus and strict punishment to those responsible.

The protest was organised by All State Kashmiri Pandit Conference (ASKPC), whose delegation led by its president Ravinder Raina later submitted a memorandum to the Lt Governor GC Murmu, highlighting various demands with special thrust for return and rehabilitation in their homeland.

The day also marked a campaign #HumWapasAayenge on social media by the community, that is pledging to return home after 30 years in exile.

"We request Prime Minister Narendra Modi and the Lt Governor to address all our issues related to social, economic and political rights. There is also a need to set a time frame for our return and rehabilitation in the valley," APMCC chairman Vinod Pandita said.

Mr Raina said the community has entered into its 31st year of exile and is living as refugees in their own country. Kashmiri Pandits have been "cheated by hollow promises" of return and rehabilitation by all successive governments, he said.

"Government, after taking into confidence the community leaders, should come up with a blueprint for resettlement of community at one place in Kashmir with political empowerment and economic rehabilitation, till then community be declared as internally displaced," he said.

Convenor, Panun Kashmir, Agnishekhar said this year the "holocaust day" was observed in the backdrop of historical and epochal decisions taken by the Union government with regards to the erstwhile state of Jammu and Kashmir and amendment in Citizenship Act which have re-established the faith of the entire exiled Hindus of Kashmir.

"The pain and agony of forced displacement has left indelible marks on the psyche of Hindus of Kashmir and last 30 years have added to our festering wounds," he said.

He expressed hope that after the scrapping of special status of J&K on August 5 last and amendments in Citizenship Act, the Centre would address the pain and agony suffered by Hindus of Kashmir for last 30 years.