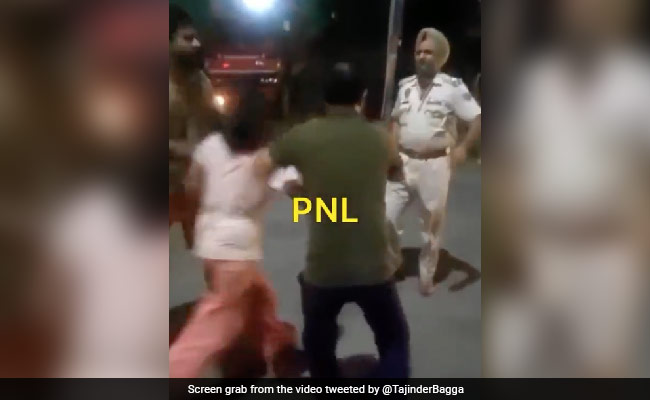 Delhi BJP leader Tajinder Pal Singh Bagga was among those who tweeted the video.

A police officer in Dera Bassi in Punjab's Mohali district was suspended and a case filed against him on Tuesday after he shot a man in the thigh during a fistfight that was caught on camera. The viral video from Sunday night shows some men and women having an argument with the sub-inspector before he fires his service revolver.

The injured man was taken to the Dera Bassi civil hospital and then shifted to a government hospital in nearby Chandigarh where he is under treatment.

The sub-inspector — Mubarikpur police post in-charge Balwinder Singh — was suspended on Monday and now faces an FIR, too, under Sections 324 (assault) and 354 (outraging modesty of a woman) of the Indian Penal Code, among other charges.

District police chief Vivek Sheel Soni has ordered a departmental inquiry against three other policemen who are at the spot. A special investigation team (SIT) headed by a superintendent of police has been formed.

After the video went viral, the victim's brother told ANI, "We were standing on Hebatpur Road when police arrived and misbehaved with us. They wanted to check my wife's bag. They were drunk and then fired at my brother." The video shows a policeman arguing with some people and then slapping a woman, at which her family members confront the cops, leading to a fight and the gunshot.

The sub-inspector has said he fired in self-defence after he was attacked by the man, his sisters, brother-in-law and another person when they stopped them for checking. Another policeman who was at the spot told ANI that the men tried to rip his uniform. "We were patrolling when we saw a couple standing near the road. We asked them where they had come from. They started fighting with us," he was quoted as saying.