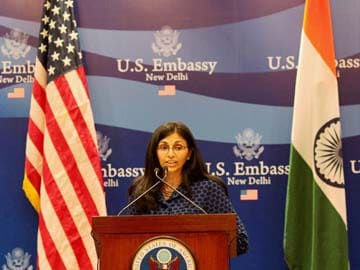 Washington: Ahead of an important India visit of US Secretary of State John Kerry, a top Obama Administration official yesterday said that the Asian nation has an increasingly vital role to play at the global stage.

As the US moves towards implementing its "rebalance to Asia" strategy, Assistant Secretary of State for South and Central Asia Nisha Desai Biswal told lawmakers that "India has vital role to play in South Asia, in the Asia Pacific, and, increasingly at the global stage."

Testifying before the House Foreign Affairs Committee's subcommittee on the Asia and the Pacific, she said India's rise as a regional and global leader, and its economic and strategic growth, are deeply in the US interest.

Highly appreciative of India's 'Look East' Policy and its engagement with Southeast Asia and East Asia, at a time of opening in Myanmar, Biswal insisted this is the reason why the United States is making the "strategic bet" on India.

Asserting that the Obama Administration is committed to a "strong and influential India" in the security realm, Biswal said India is a regional and emerging global power, as well as provider of security and a strategic partner with shared interests from the Indian Ocean to Afghanistan and beyond.

"In all the areas that the Modi government has identified as priorities, we think the United States, including our businesses and universities, can play an important role in helping address the challenges India faces and creating opportunities that benefit both countries," she said.

In favour of an early conclusion of Bilateral Investment Treaty (BIT) with India, Biswal said this would help support key economic objectives for both countries, from protection of investment interests overseas to the promotion of market-oriented policies and exports.

A BIT would also greatly improve two-way investment flows. That's good for the US economy.

Promoted
Listen to the latest songs, only on JioSaavn.com
"Increasing Indian foreign direct investment in the US would expand American jobs in a variety of professional, scientific, and technical sectors that have traditionally attracted Indian investment," she said.

"Trade expansion also benefits families and businesses by supporting productive, high-paying jobs in exports and increasing the variety of products available for purchase," she said.