Now, a Couple From Uttar Pradesh Claims Geeta is Their Daughter 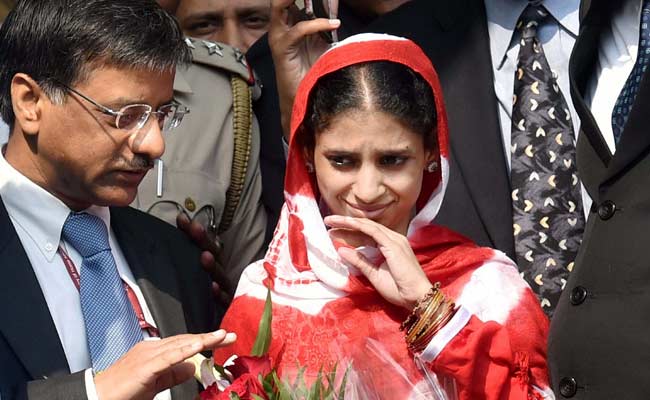 Geeta returned to India on Monday and was received by high ranking Indian and Pakistani officials at the Delhi airport.

Lucknow: A family from Uttar Pradesh's Pratapgarh district has now claimed that Geeta, who returned from Pakistan after being separated from her parents over a decade ago, is their daughter.

Yesterday, the hearing and speech impaired woman had failed to recognise the family from Bihar that claimed that she was their lost daughter.

Ramraj Gautam and his wife Anara Devi, residents of Maheshganj, met Divisional Commissioner of Allahabad, Rajan Shukla last night and said they were ready for "all probes and necessary tests to get their daughter back".

Now in her early 20s, Geeta was about 11 years old when she inadvertently crossed into Pakistan in 2003. She was spotted by the Pakistan Rangers in Lahore, and was handed over to the Edhi Foundation, a social welfare organisation that looked after her for over 10 years.

Geeta returned to India on Monday and was received by high ranking Indian and Pakistani officials at the Delhi airport.

The development came after Geeta refused to identify Bihar couple, Mahatos as her family. The couple had claimed Geeta was their lost daughter.

Neighbours of the Gautam family said that the news of the Mahatos claiming Geeta as their daughter had Ramraj Gautam and Anara Devi very "anxious and restless".

Mr Shukla has directed the Allahabad District Magistrate, Amrit Tripathi to get a DNA test done on the couple.

Meanwhile, the Gautam family has left for New Delhi to meet Geeta. The couple said that Geeta is their daughter Savita, who got separated from them in Chapra, Bihar some 11 years back.

The family has also shown officials many old family photographs where they said Geeta can be seen as a small girl.