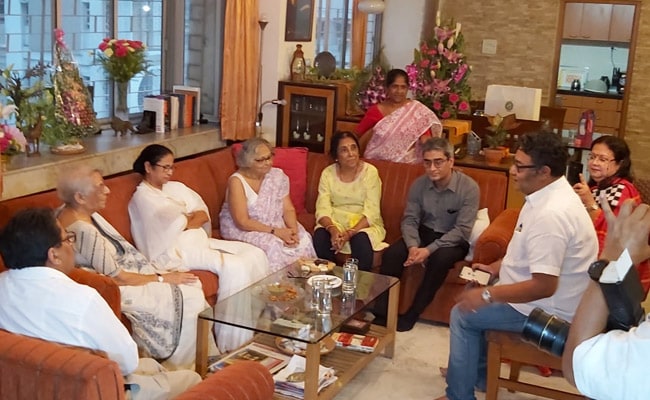 "We are proud of Abhijit. He is Bengal's pride," Mamata Banerjee said

Nobel winner Abhijit Vinayak Banerjee's economist mother Professor Nirmala Banerjee, in an hour long 'adda' with Mamata Banerjee this afternoon told the chief minister she must create greater awareness about her government's interventions to alleviate poverty in West Bengal among potential beneficiaries and the general public so they could make informed decisions about which political party to support.

All this over tea. 'Sabudana'r bora' (sago fritters) and Rabindrasangeet when the chief minister dropped by at the Banerjee home in south Kolkata around 4:45 pm to congratulate the mother on her son's achievement and her daughter-in-law Esther Duflo's. The singer was Indranil Sen, a well-known singer before he became minister in Ms Banerjee's government.

"We are proud of Abhijit. He is Bengal's pride. As I have always said, Bengal has true talent. My congratulations to his wife also. We are family. This is a double Nobel prize," she said, adding, "I came to meet his mother because the mother is the most important person in our lives. Without her upbringing of her son, nothing would have happened," Ms Banerjee said.

The chief minister said there are no plans for a state reception when Professor Abhijit Banerjee lands in Kolkata on October 23. "Let him spend time with his mother. He is here just for a day and I am out of town from the 21st," she said, adding, "When he comes to Kolkata next time, we will hold a fitting state reception."

Professor Banerjee is scheduled to launch a new book in Delhi on Saturday, October 19, participate in a Liver Foundation programme there and arrive in Kolkata late on October 22. On that one day he has in Kolkata, his neighbours, his school South Point, and his college, Presidency, are planning to felicitate him.

Professor Banerjee will fly back to the US on October 24.

Pointing out that Professor Banerjee was already involved in poverty alleviation work in Bengal, the chief minister said he was part of the mentor group for Presidency University and closely involved in a project to train quacks in rural Bengal to work as rural health care providers.

This project is run by a Bengal based non-profit, non-government organization, Liver Foundation.

Ms Banerjee was with Professor Banerjee and a few of her neighbours for almost an hour. After she left, a gift was sent up to the 8th floor Banerjee flat with sarees and textiles from Bengal's finest looms.