"No News From Home", Says Congress's Ghulam Nabi Azad As He Flies To J&K

Congress leader Rahul Gandhi and leaders of other opposition parties will visit the state today. 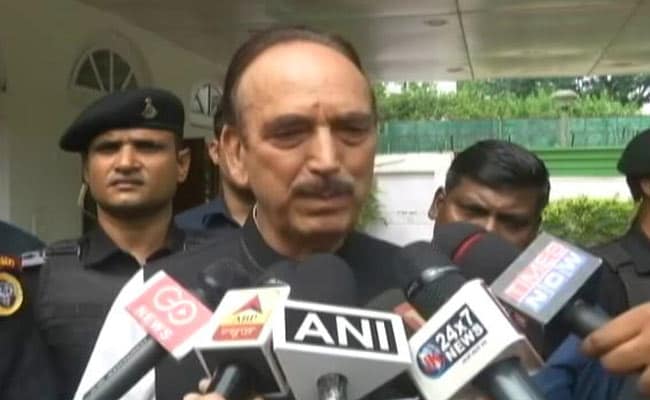 Ghulam Nabi Azad spoke to reporters before flying to Srinagar.

Congress leader Ghulam Nabi Azad, who is a part of the opposition delegation that will visit Jammu and Kashmir today, accused the government of giving contradictory statements on the situation in the state. Restrictions have been imposed in Jammu and Kashmir since the centre withdrew its special status earlier this month.

"Government says the situation in Jammu and Kashmir is normal. Then, they do not allow leaders to visit the state... haven't seen such contradiction. Why are Omar Abdhullah, Mehbooba Mufti, and Farooq Abdullah under house arrest? Why aren't they allowing me to go to my home? If it's normal, why aren't we allowed?" Mr Azad asked as he left from Delhi this morning.

"We are all responsible political parties and leaders. We are not going to break any law. The situation in Jammu and Kashmir is concerning. It's been close to 20 days and there is no news from the state," he added.

Congress leader Rahul Gandhi and leaders of other opposition parties will visit the state today. Among the parties that will be part of the opposition's all-party delegation that will land at Srinagar are Congress, CPI(M), CPI, Rashtriya Janata Dal, Nationalist Congress Party, Trinamool Congress and the DMK, sources said.

Ahead of their visit, the Jammu And Kashmir Information and Public Relations Department tweeted last night that political leaders should not "not visit Srinagar as they would be putting other people to inconvenience" at a "time when the government is trying to protect the people of Jammu and Kashmir from the threat of cross border terrorism and attacks..."

In response to the statement, Mr Azad asked: "Is it not our territory? We can't go home? they are hiding something. we aren't allowed....what are you hiding?"

Mr Azad was twice stopped at Jammu airport, most recently on Tuesday, and was "forcibly" sent back to Delhi both times

Sitaram Yechury, who was earlier stopped from entering Srinagar. said today: "We are going because they have invited us."

Some 400 politicians, including former Chief Ministers Omar Abdullah and Mehbooba Mufti, are under arrest in J&K. The restrictions are still in place at several areas in the state.