Bihar Chief Minister Nitish Kumar Oath Ceremony: The NDA won the state election last week with a wafer-thin majority and got 125 of Bihar's 243 assembly seats, three above the halfway mark. 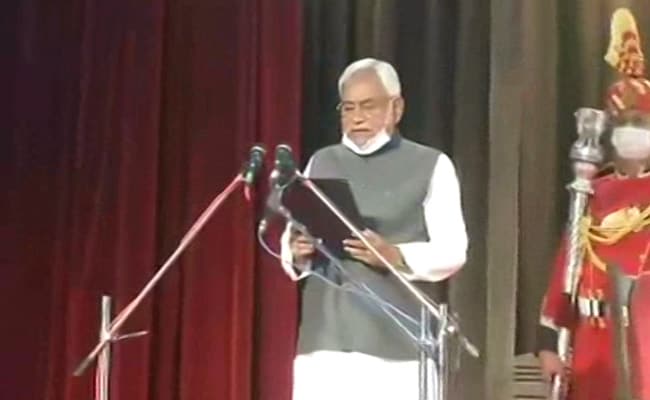 Nitish Kumar took oath as the Chief Minister of Bihar for the fourth straight term today. Fourteen other ministers will be sworn in along with him. His new deputies - BJP's Tarkishore Prasad and Renu Devi - will be among those who will take oath today at the event that will be attended by Home Minister Amit Shah.

Mr Kumar, who heads the JD(U), was administered the oath of office at Raj Bhavan by Governor Phagu Chauhan, a day after he staked claim for the formation of a new government in the state, armed with unanimous support of all legislators of the NDA despite his partys plummeted tally.

The 69-year-old, who has had a continuous run since November, 2005, except for the period in 2014-15 when Jitan Ram Manjhi kept the chair warm for him, is on course to becoming the longest serving Chief Minister of the state, surpassing the record of Shrikrishna Singh who held the top post since before Independence till his death in 1961. Mr Kumar was first sworn in as CM in 2000, for a term that lasted barely a week as he failed to muster a majority and returned as a minister at the centre in the Atal Bihari Vajpayee government.

Nitish Kumar, after meeting Governor Phagu Chauhan to stake claim to form NDA government in Bihar, had on Sunday announced that the oath-taking, as well as the swearing-in ceremony of the new cabinet, will be held at around 4.30 pm today.

BJP's Tarkishore Prasad, the MLA from Bihar's Katihar, will replace Sushil Modi as his deputy.

The BJP had, from the beginning of the election campaign, had maintained that Nitish Kumar will be the Chief Ministerial candidate for the NDA government in the state.

The NDA won the state election last week with a wafer-thin majority and got 125 of Bihar's 243 assembly seats, three above the halfway mark. The NDA's campaign hinged largely on speeches by Prime Minister Narendra Modi who visited the state at least four times during the month-long poll campaign and was seen sharing stage with Nitish Kumar.

Nov 16, 2020 23:55 (IST)
Naveen Patnaik, Shivraj Singh Chouhan Congratulate Nitish Kumar For Taking Oath As Bihar Chief Minister
Odisha Chief Minister Naveen Patnaik and Himachal Pradesh Chief Minister Jairam Thakur and Madhya Pradesh Chief Minister Shivraj Singh Chouhan on Monday congratulated Janata Dal-United President Nitish Kumar for taking oath as the Chief Minister of Bihar for the fourth straight term.
"Congratulations NitishKumarji on being sworn in as the Chief Minister of Bihar for a fourth consecutive term. Wish you and the new government the very best," Mr Patnaik said in a tweet.
Thakur extended his best wishes for Bihar to create new records in development under the leadership of Kumar.
"Hearty congratulations from Devbhumi Himachal on NDA''s grand victory in Bihar and Nitish Kumar taking oath with his cabinet. I extend my best wishes that under your leadership Nitishji, Bihar creates new records of development and keeps progressing on the path of development," he said.
Mr Chouhan said that under the guidance of Prime Minister Modi and leadership of Nitish Kumar, Bihar will establish new dimensions of development.
"Heartfelt congratulations and best wishes to @NitishKumar on swearing-in as the Chief Minister of Bihar for the seventh time. I am confident that under the guidance of Prime Minister @narendramodi and under your leadership, the NDA Government will establish new dimensions of Bihar''s development and public welfare," Mr Chouhan said in a tweet.
Union Home Minister Amit Shah and BJP President Jagat Prakash Nadda attended the oath-taking ceremony. BJP's Bihar in-charge Devendra Fadnavis was also present. The main opposition Rashtriya Janata Dal (RJD) boycotted the swearing-in ceremony stating the mandate was against the National Democratic Alliance (NDA).
Nov 16, 2020 23:13 (IST)
On Sushil Modi, Nitish Kumar says Will Miss Him, But "BJP's Decision"
Sushil Modi, the former Deputy Chief Minister of Bihar who was replaced this time by two other BJP leaders, will be missed, his former boss Nitish Kumar said today. Asked if he would miss Mr Modi, Mr Kumar -- who took oath as Chief Minister today along with 24 other ministers -- said "yes".
Asked if he would feel comfortable without the 68-year-old, who has been his trusted ally for decades, Mr Kumar said, "That is the decision taken by BJP... The BJP decides who will hold the post of minister and become Deputy Chief Minister".
Nov 16, 2020 22:31 (IST)
Sushil Modi Not Upset, Will Be Given New Role, Says Devendra Fadnavis
Moments after Nitish Kumar took oath for the record fourth term as Bihar Chief Minister, he admitted that he would miss his long-time deputy Sushil Kumar Modi. Setting the terms for a whole new dynamic after scoring bigger than ally Nitish Kumar in the election, the BJP has decided to move Sushil Modi out of Bihar and appoint two new Deputy Chief Ministers.
The BJP denied that Sushil Modi, who has been Bihar's Deputy Chief Minister for much of Nitish Kumar's 15 years in power, was upset over the shake-up.
"Sushil Modi ji is not at all upset. He is an asset to us. The party will think about him, a new responsibility will be given to him," Devendra Fadnavis, the BJP's in-charge for the Bihar polls, told news agency ANI.
Nov 16, 2020 21:55 (IST)
"Best Wishes For...": Tejashwi Yadav's Dig As Nitish Kumar Takes Oath
RJD leader Tejashwi Yadav boycotted Nitish Kumar's Monday evening swearing in ceremony but joined the LJP's Chirag Paswan in congratulating the JDU chief after he was confirmed as Chief Minister of Bihar for an unprecedented sixth time.
However, like Mr Paswan, Tejashwi Yadav also took the opportunity for a dig at the JDU boss, praising Nitish Kumar for being "nominated" to the post - to remind him, once again, that his party had performed well below par and that he had only retained his job because the BJP opted not to exercise its newfound "big brother" status to install one of its own as chief minister.
"Best wishes to respected Nitish Kumarji for being 'nominated' Chief Minister. I hope, instead of pursuing his ambitions, he will fulfill aspirations of the public and the NDA's promise of 19 lakh jobs, and will make employment, health, income generation, irrigation his priority," Mr Yadav tweeted.
Nov 16, 2020 21:26 (IST)
Voices Being Heard That NDA Government In Bihar Will Last Till West Bengal Polls: Chhattisgarh Chief Minister
Chhattisgarh Chief Minister Bhupesh Baghel on Monday said that there are voices being heard in Bihar that the newly-formed NDA government under the leadership of Nitish Kumar will remain intact till the West Bengal assembly elections.
Speaking to media when asked about Nitish Kumar's oath as Chief Minister of Bihar, Mr Baghel said, "My wishes are with him. The NDA government will be stable for how long? Why was Sushil Modi not included and removed? Why two junior people are being made deputy Chief Ministers. In Bihar, there are voices being heard that this government will last till Bengal polls."
"Tomorrow I will meet Union Ministers Amit Shah, Piyush Goyal and Nitin Gadkari. Will meet Gadkariji in Nagpur," he said.
Nov 16, 2020 20:33 (IST)
NDA Will Give Pro-Farmer, Woman, Youth And Developmentg-Oriented Government In Bihar: JP Nadda
BJP president JP Nadda on Monday expressed confidence that the National Democratic Alliance will give a "pro-farmer, women, youth and development-oriented" government in Bihar as he congratulated Nitish Kumar for taking oath as the state's chief minister.
Kumar was on Monday sworn in as the chief minister for the seventh time in two decades, in the presence of the NDA''s top leaders, including Union Home minister Amit Shah and Nadda.
"Congrats to @NitishKumar Ji and all newly sworn-in ministers. I am sure that under the guidance of PM @narendramodi Ji, NDA will give pro-farmer, women, youth and development-oriented govt in the state. I assure people of Bihar that NDA is committed to fulfil their aspirations," Mr Nadda said.
Nov 16, 2020 19:44 (IST)

We are very happy. NDA got an amazing victory in Bihar. This government will run for the next 5 years and will take Bihar forward: Devendra Fadnavis BJP in-charge for #BiharElectionspic.twitter.com/iZ1lBzBWlC

Congratulations to @NitishKumar Ji on taking oath as Bihar's CM. I also congratulate all those who took oath as Ministers in the Bihar Government. The NDA family will work together for the progress of Bihar. I assure all possible support from the Centre for the welfare of Bihar.

Nov 16, 2020 17:44 (IST)
Tamil Nadu Chief Minister K Palaniswami wishes Nitish Kumar a successful tenure
Tamil Nadu Chief Minister K Palaniswami on Monday greeted his Bihar counterpart Nitish Kumar on assuming office for a record fourth straight term and wished him all success.
"I congratulate you on your assumption of charge as the Chief Minister of Bihar for a record fourth time (term) and wish you a successful tenure," Mr Palaniswami said in his congratulatory message sent to Nitish Kumar.
Nov 16, 2020 17:34 (IST)
Nitish Kumar will be BJP's puppet: RJD's Jagdanand Singh
The Rashtriya Janata Dal (RJD) is not attending the oath-taking ceremony of Nitish Kumar in Patna on Monday because the new government is being formed.
"There is no question that we'll attend the ceremony. We don't believe in this government. This is an illegal government. This is not a chosen government by the people. Earlier he (Kumar) used to become the chief minister by betrayal, this time he cannot even be called a Chief Minister. They are trying to form the government after robbing the people of their mandate and raping their decision. Nitish Kumar will be a puppet of the BJP," said Jagdanand Singh.
Nov 16, 2020 17:29 (IST)

Nitish Kumar takes oath as the Chief Minister of Bihar.

He will take oath as the CM of Bihar for the seventh time today. pic.twitter.com/agZngpg6js

He is in the city to attend the swearing-in ceremony of CM designate Nitish Kumar. pic.twitter.com/yXZEnFqb4y