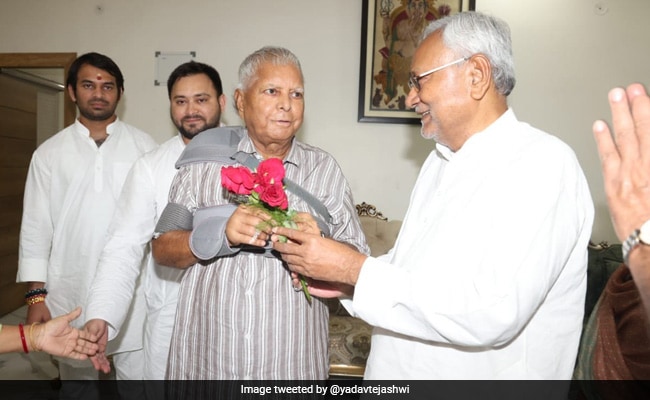 Nitish Kumar met Lalu Yadav for the first time since their parties reunited last week to form a new government in Bihar. "We were together and we will stay together," the Bihar Chief Minister told reporters this morning.

Nitish Kumar took oath on August 10 as Chief Minister of a new government with Lalu Yadav's party RJD after breaking up with the BJP.

Lalu Yadav's son Tejashwi Yadav, who was sworn in as Deputy Chief Minister, was with Nitish Kumar when the two Bihar stalwarts met again last night, after nearly five years of acrimony.

"We are together. We have been together for years. We have an old relationship. It is hardly new," Nitish Kumar said as reporters asked him about the meeting.

The Chief Minister drove down to meet the RJD leader and three-time Chief Minister, who arrived in Patna from Delhi last evening. Their off again, on again relationship has seen Bihar turn a full circle.

Tejashwi Yadav shared images of the "reunion" on Twitter. His mother and former Chief Minister Rabri Devi and his brother Tej Pratap Yadav were also present.

Nitish Kumar also brushed aside questions on BJP's attacks on him after the bitter split. "Now they will say whatever comes to their mind. They can say anything. It doesn't matter. Now even more work will be done under this government," he said.

Nitish Kumar's separation from the BJP earlier this month followed the same pattern in which he had dumped the RJD in 2017 and had revived his alliance with the BJP, leaving the Yadavs in the lurch.

After ending his ties with the BJP, he staked claim to form a government with the RJD.

On Tuesday, 31 ministers joined the cabinet, mostly from the RJD. The RJD has 16 ministries while Nitish Kumar's Janata Dal United has kept 11.