Convicted criminals can work eight hours a day and their charges are borne by the government. 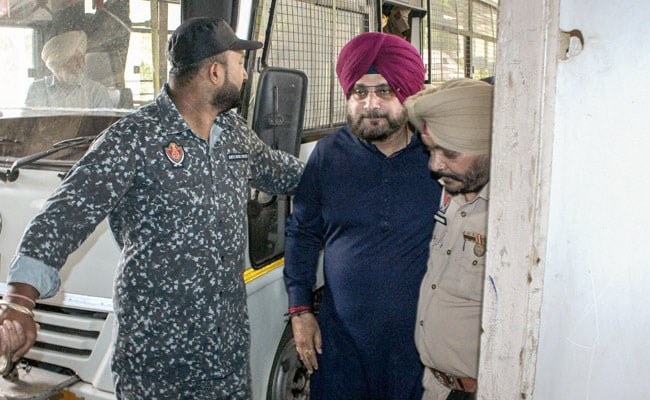 Mr Sidhu will be taught how to brief lengthy court judgments and compile jail records.

Former Punjab Congress chief Navjot Singh Sidhu, who was recently sentenced to one-year rigorous imprisonment, will work as a clerk at the Patiala Central jail where he has been placed to serve his punishment. Jail officials say Mr Sidhu, prisoner number 241383 placed in barrack number 7, will work from his cell and won't go out for work because of security concerns. Files will be sent over to his barrack.

For the first three months, the convicts are trained without wages. They are entitled to be paid Rs 30-90 daily after being classified as an unskilled, semi-skilled or skilled prisoner. Wages will be transferred directly to his bank account.

Convicted criminals can work eight hours a day and their charges are borne by the government.

The cricketer-turned-politician was taken to Rajindra Hospital in Patiala under heavy security on Monday morning for medical examination.

His counsel HPS Verma said Navjot Sidhu has sought a special diet in jail. He had said a board of doctors will carry out a detailed medical examination at the hospital.

According to the counsel, Navjot Sidhu cannot consume wheat, sugar, 'maida' and some other food items. "He can have berries, papaya, guava, double-toned milk and food items which do not have fibre and carbohydrates," Mr Verma said.

The court approved a seven-meal diet chart suggested by a panel of doctors on Tuesday.

The Congress leader suffers from medical conditions like embolism and has a liver ailment. In 2015, Navjot Sidhu also underwent treatment for acute deep vein thrombosis (DVT) at a hospital in Delhi.

DVT is caused by a blood clot in a deep vein which hinders the normal blood flow.

On Thursday, the Supreme Court ordered one-year "rigorous imprisonment" for Mr Sidhu, who recently quit as Punjab Congress chief after his party's defeat in the state election.

On December 27, 1988, Mr Sidhu got into an argument with Gurnam Singh, a resident of Patiala, over a parking spot. Mr Sidhu and his friend, Rupinder Singh Sandhu, allegedly dragged Gurnam Singh out of his car and hit him. He later died in hospital.

Mr Sidhu was accused by an eyewitness of killing Gurnam Singh with a blow to the head.

Mr Sidhu was acquitted by a local court in 1999 over lack of evidence but was convicted of culpable homicide by the High Court in 2006 and sentenced to three years in jail.

Mr Sidhu had filed an appeal in the Supreme Court, which reduced his sentence and dismissed the case after ordering the former cricketer to pay a fine, saying the incident was 30 years old and Mr Sidhu had not used a weapon.