Mr Mehdi, a former cabinet minister and an influential Shia leader from Budgam, removed his designation as NC party chief spokesperson from his Twitter bio. 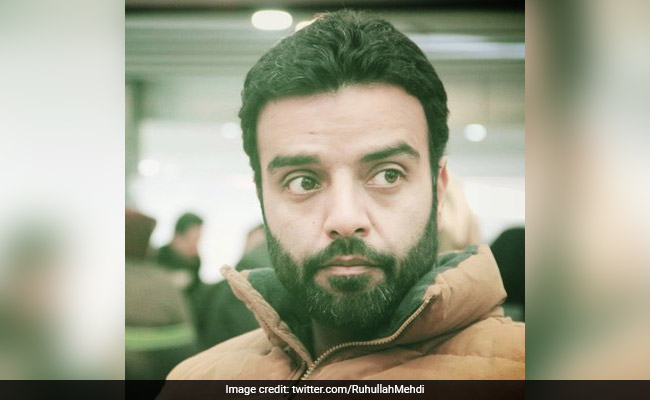 Cracks have started to appear within the National Conference (NC) as its chief spokesperson Aga Syed Ruhullah Mehdi distanced himself from the party's stand of maintaining silence over the situation in Jammu and Kashmir after August 5 and removed his party designation from his Twitter handle on Tuesday.

Mr Mehdi, a former cabinet minister and an influential Shia leader from Budgam, removed his designation as NC party chief spokesperson from his Twitter handle bio on Tuesday, setting off speculation of a rift within the party.

The three-time legislator from Budgam assembly constituency of central Kashmir, who was instrumental in party president Farooq Abdullah's Lok Sabha and vice-president Omar Abdullah's assembly poll win in 2019 changed his bio on the social media site a day after a hard-hitting commentary on the present situation in Kashmir criticising party leader Tanvir Sadiq's article in a local daily.

Reacting to the article, Mr Mehdi in a series of tweets said holding assembly elections in the Union territory should not be the only goal of mainstream politicians as part of a political process, as even being arrested was a part of it.

"Many of my colleagues are detained under PSA. Others including me are put under house detention. My heart goes out to them and I wish & pray for their immediate release. But, believe me their and our (house) detention is a political message and process itself," the NC leader, who is under house detention since August last year, tweeted.

He said the political leaders of Kashmir should not be seeking permissions from the government for various things as it would mean doing only what the government wanted them to do.

"Revisit domicile law? Lift curbs on Internet? ''LET'' political process be run? Is that all what you are looking for in this reconciliation? If I am not reading wrong, you are basically asking for 4G (Internet) and THEIR ''PERMISSION'' to let us start the political process? & then all is well?, Mr Mehdi wrote on Twitter criticising an article by party colleague Tanvir Sadiq.

"This provokes a question in my mind. What is a political process for you? Only an election? If we go with a reason and stand our course, even being detained is a part of political process. But yes, it depends on your objectives. And sorry, it''s insulting to ask THEM to "let" us," he added.

He said while the government was doing its job, the hands of local leaders were not tied.

"They are doing job. Our hands aren't tied. Our thoughts aren't tied. If the objective is not only elections, we are only in a political process. Asking them to "let" us start means doing only what they want us to do," he said.

Mr Sadiq, who was served as an advisor to Omar Abdullah when he was chief minister, had called for release of all political leaders including Mehbooba Mufti, Ali Muhammad Sagar and Shah Faesal, besides restoration of all means of communication. He had also called for allowing resumption of political process.

On April 1, when the government issued an order spelling out new domicile law and eligibility for employment in the union territory, Mr Mehdi, in his first reaction strongly protested the centre's August 5 move, saying he had not forgotten the "ugly dance of democracy" on the floor of the parliament on August 5, 2019.

"I have not forgotten the sinister laughters on the faces in parliament while my STATE was being stripped and mutilated. I have not forgotten how a coup was mounted against a population of entire state and all their democratic and constitutional rights were murdered," he had posted on Twitter.

The NC leader had said he had "not forgotten the humiliation I felt as a citizen of a proud STATE on the day of August 5".

"How sinisterly you acted and how sinister you looked. I have not forgotten, how you tossed every book of constitution out of the window while you were drunk in arrogance and power.

"You did your part and you may have forgotten. But as they say, 'the axe forgets, but the tree remembers'," he tweeted.

Mr Sadiq, in an apparent reference to the former minister's criticism, said he does not need a certificate from anyone and it was easy to comment sitting with one's family and occasionally tweet to show how brave they are.

"New Narrative?? In which part of my piece did you find your "new narrative"? The basis of my piece is to suggest a starting point & not create a new narrative & for that we need politicians & leaders to be released & sit," Mr Sadiq said responding to a Twitter user who said that he was creating a new narrative and that NC has been this doing for ages.

"I had the courage of standing for my beliefs & I thought we need to explore the way forward. You will sit and tweet & then do nothing. Different priorities! Bye bye," he said.

Aga Mehdi was not available for comment despite repeated calls.