Muzaffarpur: The van parked outside a bank carried Rs. 88 lakh. The incident took place when the street was empty. 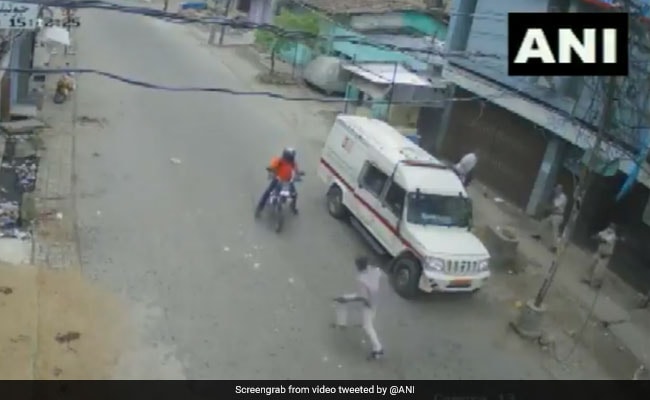 Two men on bike opened fire on security guards outside a Central Bank branch in Bihar's Muzaffarpur in an audacious attempt to loot the cash van stationed there. However, the alert guards thwarted the attempt.

A guard was injured in the fight and was treated at a healthcare centre. One of the men on the bike also had gunshot injuries as they were repelled by guards during the robbery attempt during the day, police said Wednesday. The van was carrying Rs. 88 lakh cash and was parked outside the bank in Puraini Bazar, which is usually a busy market area.

CCTV footage of the incident showed the street nearly empty because of the coronavirus lockdown and two men on a motorbike approaching the cash van from behind. The guards were unable to see them getting very close to the van, as their line of sight was blocked by the vehicle. One of the men on the bike then suddenly got down from the bike and pulled out a gun right in front of a security guard.

The guard, too, pointed his firearm and opened fire at the robber, who scrambled towards his accomplice waiting for him on his motorbike on the other side of the van.

As the shootout began, a man jumped out of the van, likely the van driver, and quickly ran into the bank. The two robbers then escaped on their motorcycle as the security guard chased them on foot.

Police said the money was safe. They said they were investigating the incident and the robbers will be arrested soon.

Several Twitter users praised the guards for thwarting the robbery bid and sought rewards for them, but a few also raised the use of obsolete firearms by security personnel.

Most Indian police personnel use the British-era Lee-Enfield rifles that are now being phased out by the government.