At least nine children were killed and about 20 injured when Manoj Baitha's speeding Bolero ploughed through them outside a government school building on the outskirts of Muzaffarpur on Saturday.

Manoj Baitha allegedly ran away after his SUV crushed 9 children in Bihar's Muzaffarpur.

Patna: A suspended BJP leader on the run since Saturday after being accused of crushing nine schoolchildren to death with his SUV while drunk has surrendered in Bihar's Muzaffarpur, police said today.

Manoj Baitha had become a major source of embarrassment for the BJP, which rules Bihar in alliance with Chief Minister Nitish Kumar's Janata Dal United (JDU) as the opposition launched an aggressive political attack over the incident.

Sources say he surrendered after the BJP leadership in the state firmly asked him to do so as the outrage refused to die down. 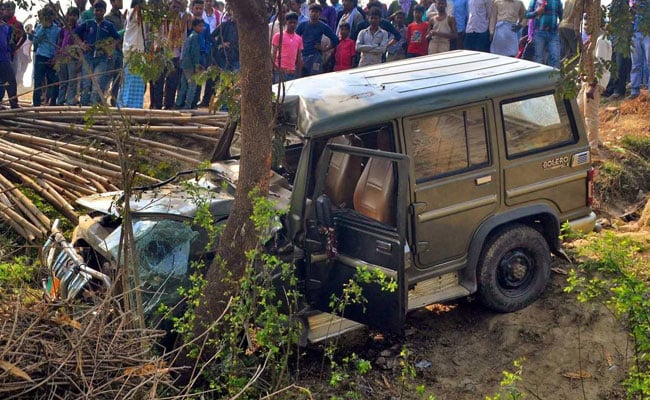 Manoj Baitha, was allegedly driving the SUV while he was drunk.

He will be produced in a court later in the day.

At least nine children were killed and about 20 injured when the BJP leader's speeding Bolero ploughed through them outside a government school building on the outskirts of Muzaffarpur on Saturday. Mr Baitha, who was allegedly behind the wheel, then got off from the car and ran away.

Congress chief Rahul Gandhi on Monday lashed out at Chief Minister Nitish Kumar, a former ally who parted ways to partner the BJP last year, mocking him over his much-publicised prohibition law.

Lalu Yadav's RJD too accused the government of shielding Mr Baitha, threatening huge protests unless he was arrested.

Promoted
Listen to the latest songs, only on JioSaavn.com
The BJP, which suspended the leader from Sitamarhi on Monday, said he is not an office bearer, as some reports had said.