Bihar minister Vijay Kumar Choudhary said, "There have been some issues within the JDU. To discuss and analyse all that, a meeting has been called tomorrow. They will see what are the issues and political implications. On basis of that, a decision will be taken". 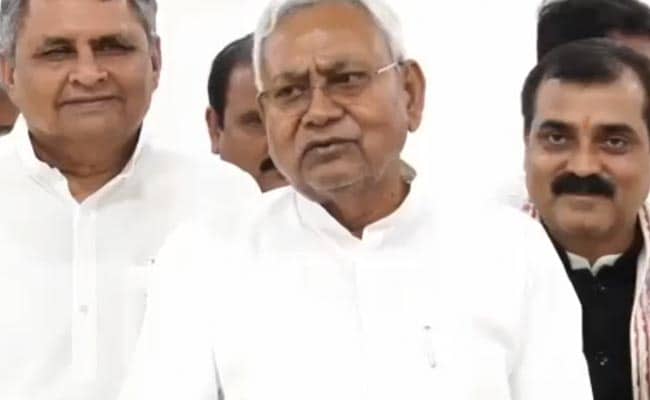 The BJP will hold a meeting tomorrow to discuss what party's Bihar minister Vijay Kumar Choudhary called "issues within the Janata Dal United". The meeting comes as the shaky alliance between the party and Bihar Chief Minister Nitish Kumar's party approaches a point of no return. The JD(U) is holding a meeting of its MLAs tomorrow to take their views on the way forward.

Asked about the health of the Bihar government, Mr Choudhary, who handles the state's parliamentary affairs portfolio, said, "Where is the question of the government's health? The government is working now. There have been some issues within the JDU. To discuss and analyse all that, a meeting has been called tomorrow. They will see what are the issues and political implications. On basis of that, a decision will be taken".

Earlier today, the BJP's Tarkishore Prasad accompanied by Mangal Pandey met Nitish Kumar at his official residence, where Mr Choudhary was also present. During the meeting, Mr Kumar had apparently brushed off the reports of any serious conflict with the BJP, saying "there's nothing serious".

But his party has accused the BJP of undermining them in various ways, starting with working against Mr Kumar in the last assembly elections.

The JD(U) has also accused the  BJP of trying to "remote control" Bihar by installing ministers close to Union minister Amit Shah.

The BJP, Nitish Kumar's party has said, is disrespecting allies, citing a recent disparaging comment by BJP chief JP Nadda. "Only the BJP will remain, regional parties will disappear," Mr Nadda had said.

Declaring that as "hugely upsetting", senior JD(U) leader Umesh Kushwaha said "Our leader, Chief Minister NItish Kumar, has done historic work over the last 16-17 years. What Bihar was earlier and what it is now? It was all done under his leadership. Is it hidden from anyone the kind of good governance and development that has taken place?"

Meetings are also happening within the Congress -- Mr Kumar's erstwhile ally in the state, who might be involved in a fresh Mahagathbandhan coalition in case the ruling alliance unravels. There are indications that the Congress is willing to accept Mr Kumar back to get the BJP out of power in the state.

Lalu Yadav's Rashtriya Janata Dal has made no official comment on the matter. But sources in the party, Bihar's single largest at the moment, have indicated that they will not accept any overtures from Mr Kumar unless he officially breaks away from the BJP.