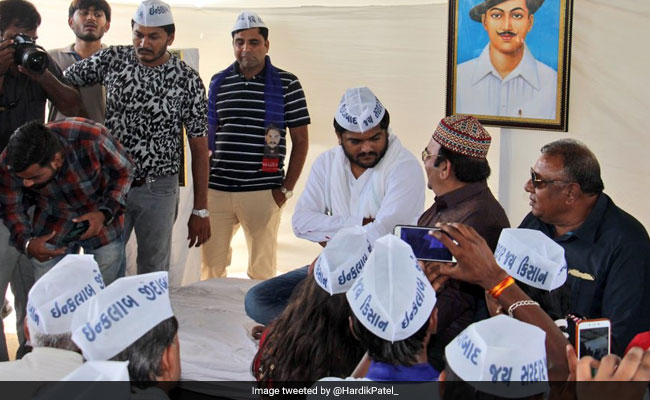 Hardik Patel sat on fast at his house on the outskirts of the city since August 25. (File)

As the indefinite hunger strike of quota agitation leader Hardik Patel entered eighth day on Saturday, his supporters forced activist Medha Patkar to return without meeting him, dubbing her anti-farmer.

Hardik Patel sat on fast at his house on the outskirts of the city since August 25 to press the demand of quota for the Patidar (Patel) community and a loan waiver for Gujarat farmers.

However, workers of the Patidar Ananmat Andolan Samiti (or PAAS, which Hardik leads) did not allow her to meet him.

"Patkar has consistently been anti-Gujarat, especially as she protested against Narmada Dam which stopped farmers from accessing water for irrigation for several years. This is the reason the PAAS youth opposed her visit," said PAAS convener and Hardik Patel's close aide Geeta Patel.

Ms Patkar later told media that she was not anti-farmer.

"Even today people do not have proper understanding of the Narmada dam issue...we are raising voice in favour of farmers. But those who do not know this...(are opposing me).

Thousands of Patidar farmers are fighting alongwith us because they have not got the full rehabilitation package," the environmental activist said.

"I do not think Hardik will oppose my visit, because I had talked to him yesterday over phone and he had no problem meeting me," she said.

The 25-year-old quota agitation leader had declared yesterday that he was not going to drink even water from now on. However, a religious leader today offered him a glass of water today, and Patel sipped some water.

Gujarat Congress president Amit Chavda also visited him. "Gujarat is the land of Mahatma Gandhi and Sardar Patel. Even the British could not suppress people's voice, so the BJP has no capability to do that," Chavda told reporters.