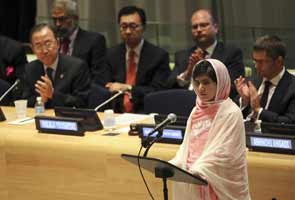 United Nations: Pakistani teen activist Malala Yousafzai, in her first public speech at the United Nations since being shot in the head by the Taliban, has said she is inspired by Mahatama Gandhi's path of non-violence.

Malala invoked Gandhi and other global advocates of non-violence stressing that, "I'm not against anyone, neither am I here to speak in terms of personal revenge against the Taliban, or any other terrorist group."

"I'm here to speak about the right of education for every child," Malala said, in an impassioned address to the UN Youth Assembly on Friday.

"I want education for the sons and daughters of all the Taliban and all the terrorists and extremists. I do not even hate the Talib who shot me. Even if there is a gun in my hands and he stands in front of me, I would not shoot him."

"This is the philosophy of non-violence that I have learnt from Gandhiji, Badshah Khan and Mother Teresa," the 16-year-old said.

Malala told the UN that she would not be silenced by terrorist threats.

"Let us pick up our books and our pens. They are our most powerful weapons. One teacher, one book, one pen, can change the world," Malala said.

The UN celebrated the Pakistani schoolgirl's 16th birthday on Friday as Malala Day with day-long programmes for youth, drawn from all over the world.

Secretary General Ban Ki-moon named her 16th birthday, 'Malala Day', in honour of her heroic stand to ensure education for all.

Ban welcomed Malala to the UN praising her courage and determination.

"Malala chose to mark her 16th birthday with the world," Ban said, noting the strong support she has received from millions of people all over the world.

"Malala, you are not alone. We are all with you, standing behind you," the UN Secretary General said.

The meeting, which featured nearly 1,000 youth leaders, was addressed by former United Kingdom Prime Minister Gordon Brown, in his capacity as UN Special Envoy for Global Education, Vuk Jeremic, President of the General Assembly, and Ahmad Alhendawi, the Special Envoy on Youth.

Malala became a global icon for girls' education after being brutally attacked by Taliban militants while on her way to school in Swat valley on October 9, 2012.

Malala told the gathering that the Taliban's attack nine months ago changed nothing in her life, except that "weakness, fear and hopelessness died."
"The extremists were, and they are, afraid of books and pens," Malala said.

"The power of education frightens them. They are afraid of women," she said.

Malala called for worldwide action against illiteracy, poverty and terrorism.

This call was delivered just as the UN Educational, Scientific and Cultural Organisation's 'Education for All Global Monitoring Report', launched a new policy paper spotlighting that globally, the number of children out of school has fallen from 60 million in 2008 to 57 million in 2011.

However, 28 million children out of school live in the world's conflict zones, and more than half of those are women and girls.

"So here I stand," Malala declared before the Assembly, "one girl among many. I speak, not for myself, but for all girls and boys. I raise up my voice, not so that I can shout, but so that those without a voice can be heard".

Describing the terrible October 2012 incident that only strengthened her resolve, she said the Taliban shot her on the left side of her forehead.

"They shot my friends too. They thought that the bullets would silence us. But they failed," she said, adding that the incident instead gave birth to "thousands of voices".

"The terrorists thought that they would change our aims and stop our ambitions but nothing changed in my life except this: weakness, fear and hopelessness died. Strength, power and courage were born. I am the same Malala. My ambitions are the same. My hopes are the same. My dreams are the same," the rights activist said.

Telling the Assembly that she was focusing on women's rights and girls' education because they were suffering the most, she called upon world leaders to change their strategic policies in favour of peace and prosperity.

"We call upon all governments to ensure free compulsory education for every child all over the world," she said, also calling on governments to fight against terrorism and violence, to protect children from brutality and harm.

Ban reiterated the UN's commitment to give access to quality education to every girl and boy through its Global Education First Initiative which has three priorities: to put every child in school; improve the quality of learning; and foster global citizenship.

"No child should have to die for going to school. Nowhere should teachers fear to teach or children fear to learn.

Together, we can change the picture," he said.

Ban also encouraged the students gathered at the Youth Assembly, to continue to voice their concerns on issues that matter to them.

"I urge you to keep speaking out. Keep raising the pressure. Keep making a difference," Ban said.

"You are sending a message, a message of hope and empowerment... a message of dignity and opportunity. All of you are on the frontlines," he said.
President of the General Assembly Vuk Jeremic underlined the urgency of providing access to education to every child, regardless of factors like geography, gender, disability, language, wealth and ethnicity, and called member states to act quickly to avoid further disparities in education levels.

He also stressed that the quality of education should be improved, providing young people with the necessary skills to succeed in the current world economy.

"School enrollment is nothing more than a necessary foundation upon which to build a 21st-century set of educational standards," Jeremic said.

"Basic literacy should not be seen as an end in itself, but merely as a baseline tool for teaching cognition, mathematics, problem-solving, and creative thinking," he said.

Opening the proceedings, Brown told the Youth Assembly: "You cannot say there is anything other than an education emergency that we need to solve."

Promoted
Listen to the latest songs, only on JioSaavn.com
With that in mind, he hailed young people as "the new superpower in the world" with the capability to overcome all obstacles to access education.

On June 17, Brown launched a worldwide petition calling for urgent action to ensure the right of every child to safely to attend school. Malala was the first signatory and since then, more than one million people have signed the petition.