Malabar 2020: This is the first time that all four partners of the Quadrilateral alliance or Quad - India, the United States, Australia and Japan - are participating together in a naval exercise of this scale. 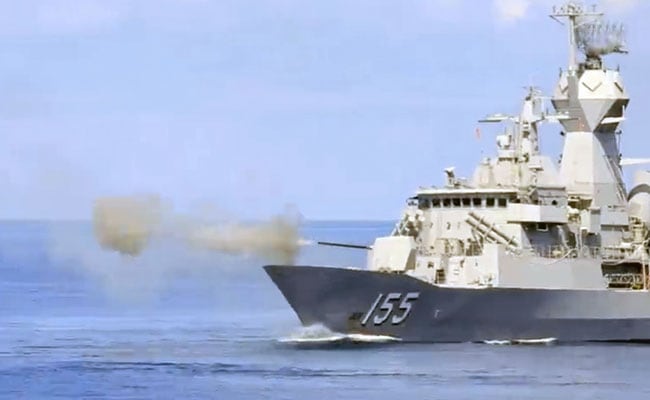 Malabar 2020: There will be no contact between military personnel because of COVID-19.

A weapon-firing sequence was performed on Day 3 of the four-nation naval war games "Malabar 2020" in the Bay of Bengal, off Visakhapatnam.

India, the US, Japan and Australia began their largest joint naval exercises in over a decade on Tuesday, seen as part of efforts to balance China's military and economic reach in the region.

A video of the weapon-firing sequence from the first phase of the naval exercises today shows shells being fired from an Indian and an Australian frigate. The first of the two-phased drill is from November 3 to November 6.

This is the first time that all four partners of the Quadrilateral alliance or Quad - India, the United States, Australia and Japan - are participating together in a naval exercise of this scale.

Watch | Phase 1 of the 24th edition of #NavalExerciseMalabar2020 underway in the Bay of Bengal.

Indian Navy, United States Navy, Japan Maritime Self Defence Force and the Royal Australian Navy are participating in the exercise that started on November 3 pic.twitter.com/G8x8Plz9uH

Five ships of the Indian Navy, including a submarine, were deployed in the exercise along with US Navy's John S McCain missile destroyer, Australia's Ballarat frigate and a Japanese destroyer, the Defence Ministry said.

There will be no contact between the military personnel of the four nations because of COVID-19 restrictions during the first phase of the drills running till November 6, the Defence Ministry said.

This year, the "Malabar" wargames was expanded to include to cover all members of the Quad.

The second phase of the exercise will be conducted in mid-November in  the Arabian sea.

The exercises come at a time when India is locked in a military stand-off along the Line of Actual Control with China.