President's Rule Revoked In Maharashtra At 5:47 am

The BJP, which emerged as the single largest party in the state elections last month, could not earlier stake claim to form a government after it could not reach an agreement with its former ally Shiv Sena on its "50:50" demand 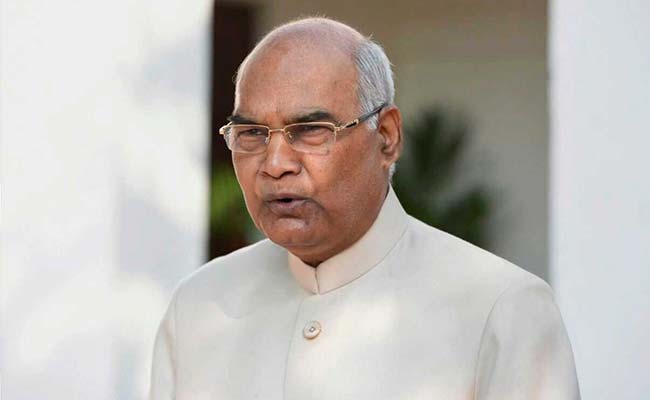 President's Rule was revoked in Maharashtra at 5.47 am mere hours before the BJP's Devendra Fadnavis took oath as Chief Minister for a second term. The state had been placed under President's Rule on November 12 after last month's elections delivered a fractured mandate. In a brief three-line notification issued by Union Home Secretary Ajay Kumar Bhalla this morning, President Ram Nath Kovind revoked President's Rule "in relation to the state of Maharashtra with effect from the 23rd day of November, 2019".

Government formation in the state had appeared to be a done deal late Saturday night after a lengthy tripartite meeting between the Shiv Sena, the Congress and the NCP that resulted in Sena chief Uddhav Thackeray being announced as the alliance's Chief Minister.

"We all have consensus on the name of Uddhav Thackeray as Chief Minister," NCP chief Sharad Pawar said after emerging from the meeting. Seconds later Mr Thackeray and his son, Aaditya Thackeray, also emerged and said: "Discussions were positive, fruitful."

However, in a dramatic overnight twist the BJP formed an alliance with the Nationalist Congress Party (NCP). Devendra Fadnavis took oath as Chief Minister and Sharad Pawar's nephew, Ajit Pawar, was sworn in as his deputy. 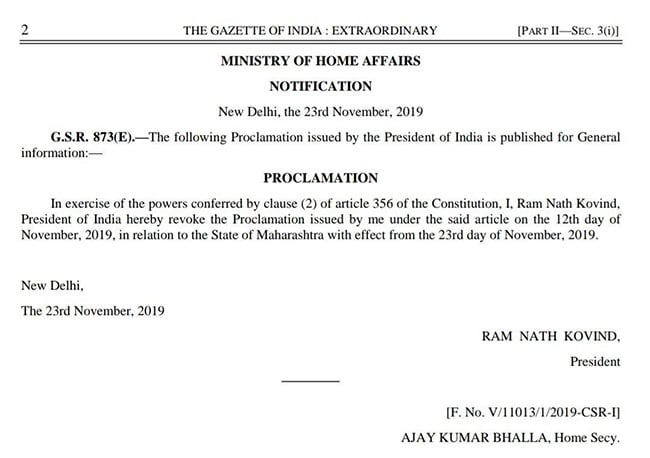 "Maharashtra needed a stable government, not a khichidi government," Mr Fadnavis said after taking oath, adding that the Shiv Sena "did not follow people's mandate". "I thank the NCP coming in support to form this government. We all know that there was President's rule for the last few days... Shiv Sena did not follow the mandate," he said.

After taking oath as the Deputy Chief Minister, Ajit Pawar told reporters: "From the day of result to this day.... no party was able to form the government. Maharashtra was facing many issues, including farmer issues. So we decided to form a stable government."

The BJP, which emerged as the single largest party in the state elections last month, could not earlier stake claim to form a government after it could not reach an agreement with its former ally Shiv Sena on its "50:50" demand.