Women and elderly men are forced to walk kilometers through difficult rocky paths in the scorching heat to fetch water from the nearby natural streams. 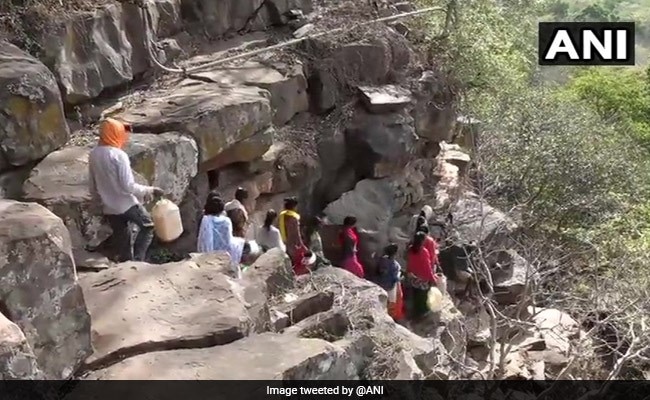 Villagers of Patapur in Madhya Pradesh's Chhatarpur District are forced to walk long distances on rocky terrain in intense heat to fetch water for drinking and other uses.

The village has only one tube well which is inadequate to meet the needs of all its residents.

Women and elderly men are forced to walk kilometers through difficult rocky paths in the scorching heat to fetch water from the nearby natural streams.

"In order to fetch water, we have to walk kilometers along the rocky terrains to reach the water streams. There is no other route and it is very dangerous. We request the administration to arrange water facilities in our village. Since this village was set up, people have been facing this problem. But, nothing has been done," said Barelal, a villager.

"We walk two to four kilometers to fetch water and it takes us almost three hours. The entire family goes to fetch water, and we spend most of our time doing this," said Maniram, another villager.

"We have to go down to the trench to get water. The water there gets infected by insects too. Even if bore wells are dug, the water is not sufficient, which is a major problem for us all," said Paramlal, a villager.

"Our main concern is safety. We are scared that someone might get hurt while crossing the rocky terrain. The entire day goes in collecting water. The entire family has to go, and we have no choice as we need water. We have received no help from the administration so far, and we hope that the issue is resolved so that the children don't face similar problems in the future," said Ramdulari, another villager.

The Zila Panchayat CEO said that the concerned authorities have been directed to submit a report so that the issue can be resolved at the earliest.