Sumitra Devi Kasdekar submitted her resignation in person to pro-tem Speaker Rameshwar Sharma in the afternoon. 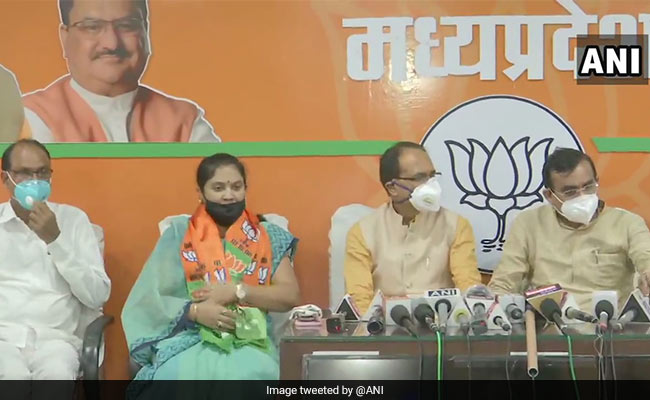 Sumitra Devi Kasdekar, Congress MLA from Nepanagar in Madhya Pradesh's Burhanpur district, resigned from the Assembly on Friday and joined the ruling BJP.

It was another jolt to the Congress in the state days after the resignation of Pradyuman Singh Lodhi.

Ms Kasdekar submitted her resignation in person to pro-tem Speaker Rameshwar Sharma in the afternoon.

"I have accepted the resignation of the Nepanagar MLA as she insisted on resigning even after being given time to think over it," Speaker Sharma said.

With the Speaker accepting her resignation, the Congress' strength in the House is down to 90. Also, as many as 26 out of 230 Assembly seats in Madhya Pradesh are now vacant, for which by-polls would be held.

Welcoming Ms Kasdekar into the BJP at a function, Chief Minister Shivraj Singh Chouhan said, "Congress is a sinking ship. People are feeling suffocated. When you look at Delhi, you always find either Sonia Gandhi is party president or Rahul Gandhi is the chief," he said.

"In the state too, the same person first becomes party president, then chief minister and now leader of opposition," Mr Chouhan said, without naming Kamal Nath.

Ms Kasdekar said, "I was ignored in the party. No development took place in my tribal constituency during the Congress' 15-months regime. I kept meeting the party leadership and others on the issue of development but in vain, and therefore decided to join the BJP for development of the area," she said.

State BJP president Vishnu Dutt Sharma and cooperatives minister Arvind Bhadoria among others were present on the occasion.

Congress MLA Pradyuman Singh Lodhi resigned as a member of the Assembly on Sunday. Lodhi represented Bada-Malhera constituency. Hours after resigning, the BJP government appointed Lodhi as chairman of the MP State Civil Supplies Corporation and accorded him a cabinet minister's rank.

The Congress lost power in Madhya Pradesh in March when 22 MLAs, loyalists of Jyotiraditya Scindia, quit the party. Two MLAs had died earlier. Thus, the effective strength of the Assembly is now 204.

The ruling BJP has 107 MLAs. The Bahujan Samaj Party (BSP) has two legislators, Samajwadi Party one and four are independent.