"Made A Huge Mistake": Delhi Congress Defector Apologises In 2 AM Video

Mr Mehdi's about turn came after he was slammed by party workers for jumping ship. 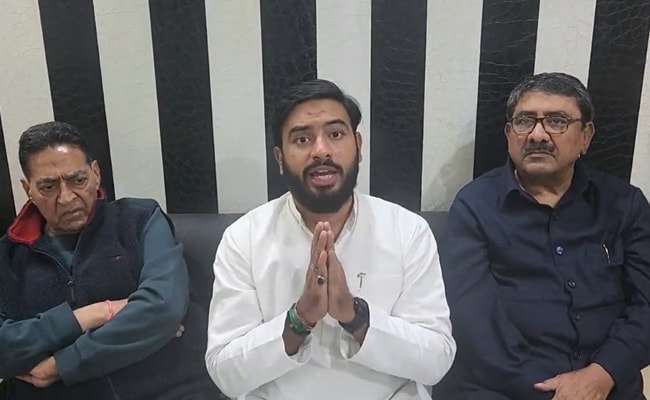 The video, posted at 1:25 am on Saturday, shows Mr Mehdi apologising with folded hands.

Barely a few hours after he switched loyalties and joined the Aam Aadmi Party, Delhi Congress Vice President Ali Mehdi said he has rejoined the grand old party. Early this morning, Mr Mehdi profusely apologised for his "mistake" in a video posted on his Twitter account, and said, "I am a worker of Rahul Gandhi."

Mr Mehdi said that newly elected councillors Sabila Begum from Mustafabad and Nazia Khatoon from Brijpuri, who had joined AAP along with him, have also rejoined the Congress.

The video, posted at 1:25 am on Saturday, shows Mr Mehdi apologising with folded hands. "I made a huge mistake," he said, reaffirming his loyalty to the Congress, and repeatedly apologising on camera. "My father has been in the Congress for 40 years," he further said, adding that he has asked the other councillors to upload similar videos.

"Councilor Naziya Khatoon from Brijpuri, councilor Sabila Begum from Mustafabad and our block president Aleem Ansari, who lost by 300 votes, were, are, and will remain the workers of Rahul ji and Priyanka ji..... Rahul Gandhi zindabad," he said in another tweet about half an hour later.

In this video, he is seen with three other people, one of whom says they were approached by AAP.

Mr Mehdi's about turn came after he was slammed by party workers for jumping ship.

Manu Jain, the social media in-charge of the Indian Youth Congress, called Mr Mehdi a "snake", and asked how much money he took to turn.

Reacting to the video, the Congress' Rajya Sabha MP Imran Pratapgarhi, tweeted, "It's two o'clock in the night and the councillor who won from Mustafabad on Congress symbol has returned to the party. They were tricked into joining the AAP. Within a few hours, he rectified his mistake and has now again become a part of the Congress."

After announcing his return to the Congress fold, Mr Mehdi said, "In the areas from which these councillors won, people voted for me and my father and not any particular party. They believed us and our work." "That's why AAP had approached us. My only concern was development works should be carried out in the area. My father had been an MLA from this area for a very long time. But when the BJP won the Assembly seat, all developmental works stopped," he told news agency PTI.

Asserting that he took the "stupid step" of joining AAP hoping that work would pick up pace in the area.

"I got emotional... But after joining AAP I realised that they might provide funds for development works, but their stand on minority issues didn't change. The people of my constituency told me that our fight is not only for development but also for survival," Mehdi said, adding, "I will not be able to leave Rahul Gandhi and the Congress." He claimed that those who protested after he joined the AAP were AIMIM workers who were frustrated as their party lost by around 8,000 votes in the civic polls.

The Aam Aadmi Party (AAP) on Wednesday won 134 seats, easily crossing the 126-majority mark, in the high-stakes elections to the Municipal Corporation of Delhi (MCD). The civic body, among the world's biggest, has 250 seats. The BJP won 104 seats and the Congress managed to get just nine wards of the MCD.