Lok Sabha Sits For Nearly 11 Hours During Discussion On Railways

Railway Minister Piyush Goyal is expected to reply to the debate on Friday. 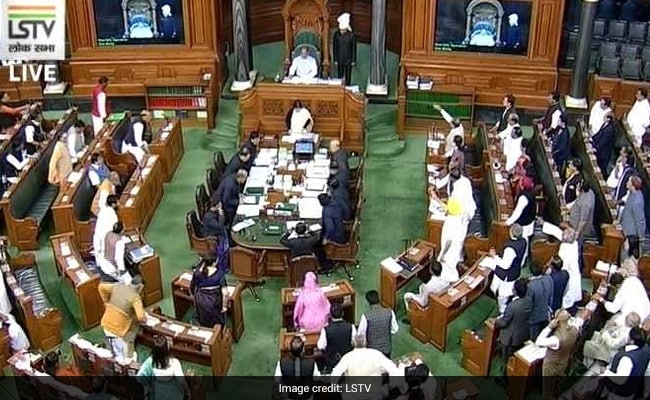 The marathon debate on grants for railways saw participation of a large number of members.

The Lok Sabha on Thursday extensively discussed the demands for grants for Railways for 2020-21 with the marathon debate lasting nearly 11 hours and seeing the participation of a large number of members.

While the opposition MPs accused the BJP-led government of seeking to privatise Railways and demanded revival of a separate budget for Railways, the BJP members said that there had been path-breaking initiatives to improve the Railways in the past five years.

The members also raised specific demands related to their states and constituencies.

Initiating the debate, Congress member MK Raghavan said that Railways is not a service under "business sector" and that it serves the poor.

"The BJP government is unfortunately unaware of the larger purpose and the societal reasons for the establishment of the rail network," he said.

The member said that Railways was not merely "a profit-making engine" ready to be auctioned off to the highest bidder "but poor man''s lifeline of transport that connects him to the vast length and breadth of the nation".

He accused the government of apathy towards Railways and said steps were being taken for its privatisation.

"One of the important steps towards privatising the Railways is the disappearance of an exclusive Railway Budget from 2017. This is very unfortunate. The Union Budget''s focus on the Indian Railways is cursory. An exercise in obfuscation, it reveals utter neglect of India's largest enterprise," he alleged.

DMK member SS Palanimanickam urged the government "not to go for the privatisation of Railways".

He also said that there should be a separate budget for Railways as it was earlier. "Only then you can improve upon the functioning of Railways," he said.

BJP member Ajay Bhatt said that the government was working with a long-term vision and had taken initiatives in various aspects related to Railways.

He said apart from trains such as Vande Bharat Express, the government was working for capacity enhancement and redevelopment of stations.

NCP member Supriya Sule said that different governments have contributed to the development of Railways and asked about the project to develop model railway stations.

"What is the status of this project? I do not want it to go like Smart City because Pune was also taken up as a Smart City. But over the last five years, only about Rs 250 crore has come for it out of which Rs 135 crore was given to consultants. So, really not much has happened," she said.

Trinamool Congress member Saugata Roy said that the move to abolish a separate rail budget was "a wrong step".

"That is why the Railways is not getting any primacy even today. I think that the government should revert to the old system of having a separate railway budget," he said.

Roy also said that railway officers were opposed to the move.

"They cannot say it aloud because the Government has got 303 MPs. But if you ask individually, every railway officer will say that this will destroy the ethos of the Railways. I strongly oppose the merger of the three railway services into one," he said.

He also expressed apprehensions about the completion of the bullet train project. "They have not yet acquired the land," he said.

Roy also said the vacancies in Railways should be filled at the earliest.

"In one year, from March 31, 2018, to March 31, 2019, the number of railway workers decreased by 43,534. It came down to 12,26,000. Railways is the biggest employer in the public sector. You are saying that you are expanding the rail network and you are reducing the number of employees. It is totally anti-labour and anti-national," he said.

He lauded the Railway Ministry for initiatives such as Tejas Express. "It is a huge success as a ''Make in India'' project as well. We expect more trains to be launched. You may have a bullet train in Maharashtra and Gujarat. But in states like Andhra Pradesh and other south Indian states, we expect more of the Tejas Express trains to be commissioned so that the connection between the cities in south India gets better," he said.

Congress member K Muraleedharan said that sufficient funds were not available for the growth of Railways after the merger of rail budget with the general budget.

"This is our feeling because if we approach for any developmental works in the railway stations including the construction of new building or making of new platforms. The reply given to us is that there are not enough funds with us and so you should use your MPLADs fund," he said.

National Conference member Hasnain Masoodi said the proposals in the budget for Railways were not path-breaking.

"For the last few years, we have seen that the number of passengers who use the Railways is coming down and so is the income from passenger traffic, resulting in a loss of Rs 38,000 crore," he said.

Masoodi said that Railways is the official transporter of the nation and has cultural and emotional values.

"The government is expected to realise that it is not a commercial enterprise as it serves the people at the lower strata of society," he added.

Referring to Jammu and Kashmir, Masoodi said that no new proposal has been made to strengthen the railway network in the Union Territory.

"We have three proposals under consideration. One is the Jammu-Poonch railway line. I believe that the survey on that line has already been done. It should have attracted the attention of the Ministry. The second is the Baramulla-Kupwara rail link. Again, the survey has already been done and the Ministry was expected to make an announcement during the current financial year and provide some allocation to start the project," he elucidated.

The NC MP demanded that the railway station in Srinagar should be named after Sheikh Abdullah, saying he spearheaded the freedom struggle with Mahatma Gandhi and other leaders.

Minister of State for Railways Suresh Angadi intervened in the debate and talked of the initiatives of the government. He said that coaches and engines had been modernised and safety record was improving.

Railway Minister Piyush Goyal is expected to reply to the debate on Friday.