Narayan Rane said his party will contest a few Lok Sabha seats and candidates will be announced in phases. 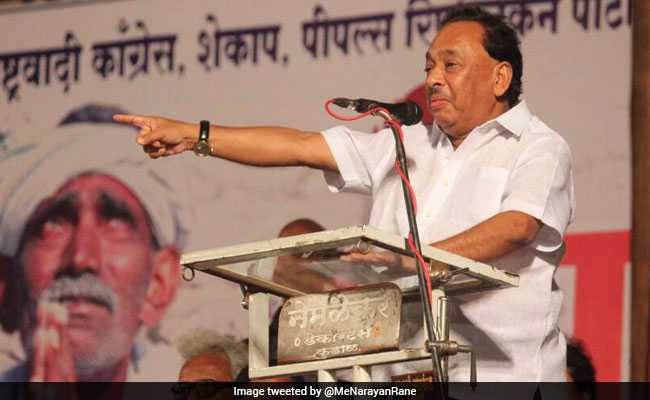 Narayan Rane said there are four prominent parties in the election fray.

Former Chief Minister Narayan Rane, whose Maharashtra Swabhimani Paksh (MSP) is an ally of the ruling BJP, on Friday said his party will contest the ensuing Lok Sabha polls on its own.

Mr Rane, who has pockets of influence in the coastal Konkan region of Maharashtra, said his fledgling party will neither tie-up with the Congress-NCP combine nor the BJP and the Shiv Sena.

Addressing party workers in Mumbai, the veteran politician also announced the candidature of his son Nilesh Rane from the Ratnagiri-Sindhudurg parliamentary seat.

"We are not going with Congress-NCP or Sena-BJP. We are contesting (Lok Sabha polls) independently with all seriousness," he said.

Mr Rane said his party will contest a few Lok Sabha seats and candidates will be announced in phases.

Maharashtra has 48 Lok Sabha seats. The former chief minister took a swipe at BJP and Sena leaders for holding pre-poll alliance talks when the country was mourning the death of 40 CRPF soldiers in a terror attack at Pulwama in Jammu and Kashmir.

"The meetings should have stopped. But these meetings were for selfish motives to stick to power," he charged.

Both the Sena and the BJP have been critical of each other despite being in ruling alliance and are now getting back together for the sake of power, Mr Rane alleged.

"Despite being critical of BJP, the Sena leadership had meeting with BJP for an alliance (for Lok Sabha polls) without any shame. The Sena thinks Marathi people will support them irrespective of whatever they do," he claimed.

Lashing out at the Uddhav Thackeray-led party, Mr Rane, who was once in the Sena, said the Maharashtra-based outfit had done nothing to safeguard the interest of Marathi-speaking people.

He said there are four prominent parties in the election fray, but they don't have candidates for all the seats in the state.

"We are different from these four. We will not go with either the 'agadhi'' (Congress-NCP) or the 'yuti'' (Sena-BJP)," the Rajya Sabha MP said.

Referring to Hindi movie "Thackeray", based on the life of Sena founder Bal Thackeray, Mr Rane said he hasn't seen the film since he can't watch anyone in the leader's place.

"The son (Uddhav Thackeray) is not even 5 per cent of Balasaheb. What will the actor (in the film) do?" he said.

The movie was made with the sole purpose of making money in late Thackeray's name, the former chief minister alleged.

Mr Rane formed his own outfit in 2017 after the quitting the Congress.

The 66-year-old politician is a Rajya Sabha MP from the BJP quota and also a member of the BJP's manifesto committee.