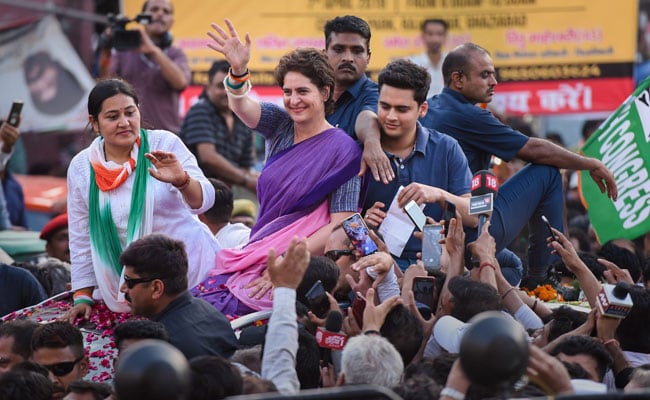 Congress General Secretary Priyanka Gandhi Vadra will hold two roadshows in Delhi today. Her first roadshow began in the North-East Delhi Lok Sabha constituency and second one will be taken out from the South Delhi constituency. Hours before the roadshow, Delhi Chief Minister Arvind Kejriwal said that Priyanka Gandhi was "wasting her time" campaigning in Delhi. "She (Priyanka Gandhi) is wasting her time, why doesn't she campaign in Rajasthan and Madhya Pradesh? She's doing rallies in UP against the Samajwadi Party-Bahujan Samaj Party, she's doing rallies in Delhi against AAP. Both brother and sister aren't going to those places where there's a direct fight with the BJP," Mr Kejriwal said on Wednesday.

Delhi will vote on Sunday, May 12, in the sixth round of the Lok Sabha election. The results will be declared on May 23.

Here are the LIVE updates of Priyanka Gandhi's roadshow in Delhi:

May 08, 2019 18:31 (IST)
Fight polls on basis of GST, demonestisation: Priyanka Gandhi hits back at PM
"A girl from Delhi is openly challenging you. Fight the last two phases of elections on nites ban, GST, safety of women. Fight on the false promises that you made to the youth of this country," Priyanka Gandhi was quoted as saying by news agency ANI.

Sheila Dikshit is the party's candidate from North-East Delhi