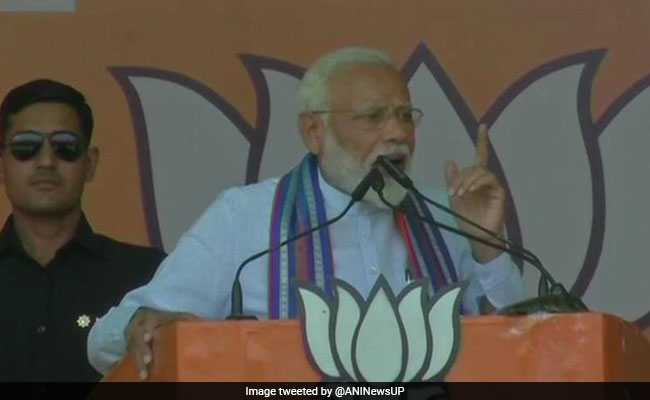 Delhi Chief Minister Arvind Kejriwal was today slapped by a man during a roadshow in the Moti Nagar area. Mr Kejriwal, the Aam Aadmi Party chief, was standing on an open jeep, canvassing in the New Delhi constituency, when the man jumped up and attacked him.

Earlier in the day, Congress chief Rahul Gandhi launched a scathing attack at Prime Minister Narendra Modi ahead of the fifth phase of the national elections to be held in 51 constituencies across seven states.

Mr Gandhi slamming PM said "Army is not his personal property". He also said Congress will have a "stern approach" against terrorism.

Later, PM Modi launched a counter-attack at Mr Gandhi alleging that under UPA "one of naamdar's business partners got defence offset contract".

Here are the the live updates of Lok Sabha Elections 2019:

When #Gandhi family is nostalgic abt Sh #RajivGandhi today, do they also think about #poor, whose hard earned money went into the coffers of #Gandhifamily? What do you call a man who exploited defence deals like #Bofors to enrich his family? @RahulGandhi truth is bitter, I know

Condemn in the strongest terms the cowardly attack on CM Delhi.

May 04, 2019 19:29 (IST)
Delhi Chief Minister Arvind Kejriwal was today slapped by a man during a roadshow in the Moti Nagar area. Mr Kejriwal, the Aam Aadmi Party chief, was standing on an open jeep, canvassing in the New Delhi constituency, when the man jumped up and attacked him. He was identified as 33-year-old Suresh, a spare parts dealer. The AAP, meanwhile, has blamed the BJP for the attack.
May 04, 2019 13:35 (IST)
BJP Chief Amit Shah in a tweet had made a similar allegation against Rahul Gandhi. "With Rahul Gandhi's Midas Touch, no deal is too much! When he has a say, his business partners make hay. Doesn't matter if India suffers on the way!" he tweeted with a media report.
May 04, 2019 13:17 (IST)
Congress, Samajwadi Party Betrayed Mayawati: PM Modi
"Congress leaders happily share stage with the Samajwadi Party in the rallies, these people have betrayed Behenji (Mayawati) so cunningly that even she is not able to comprehend. Party which was staking claim to PM post before 1st round of voting now admits to being a vote cutter," PM Modi was quoted as saying by news agency ANI
May 04, 2019 13:15 (IST)
One Of Namdar's Business Partners Got Defence Offset Contracts: PM Modi
Hitting back at Rahul Gandhi, Prime Minister Narendra Modi today said: "Today I read that during UPA, one of naamdar's business partners got defence offset contracts. Apni sarkar, dost bhi apna aur raksha sauda bhi bada yaani naamdar ke liye malai ka poora intezam tha (It was their government, their friend and their own defence deal.... which means they had arranged it all)".
PM Modi was addressing a rally in UP's Pratapgarh.
May 04, 2019 11:36 (IST)
Rahul Gandhi On Why He Apologised To The Supreme Court
Rahul Gandhi also said he apologised to the Supreme Court because the matter was "sub-judice".
"I apologised to the Supreme Court as the matter is sub judice. Any comment on the matter was unwarranted. Neither have I apologised to the PM nor the BJP," he said.  "Also chor comment is now reverberated through out the country. The remark stands. Anywhere you go and prompt 'chowkidar' people will get back with 'chor hai'," he added.
May 04, 2019 11:19 (IST)
"PM Modi Insulting Army....": Rahul Gandi Takes A Dig
Prime Minister Narendra Modi is insulting the army by questioning the surgical strikes under the UPA, Rahul Gandhi said today attacking the prime minister. "The Army, Air Force or Navy is not personal properties of Narendra Modi ji like he thinks. When he says that surgical strikes during UPA were done in video games then he is not insulting Congress, but the Army. These air strikes were done by the Army and we do not politicize the Army. The Prime Minister should not insult the Army," he said.
May 04, 2019 11:14 (IST)
Congress chief Rahul Gandhi held a press conference this morning. He launched an all-out attack at the prime minister and said the BJP's campaign only reflects the panic in the party. "Whenever I look at him, I can only sense panic," he said.