Last month, Kalyan Singh had said that PM Modi's re-election is a necessity "for the sake of the country" and the society and every party member should work for it. 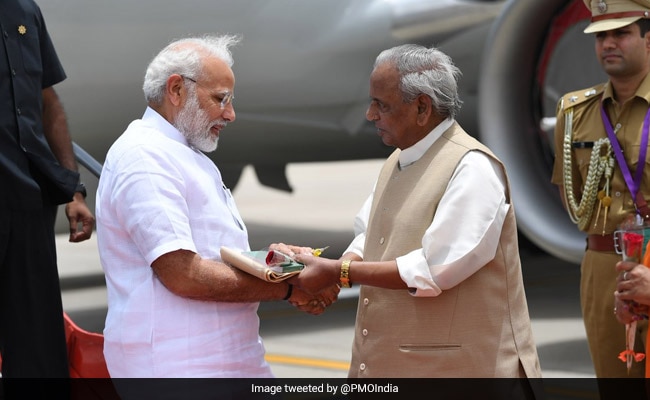 Kalyan Singh calling for PM Modi's re-election has violated the rules of his constitutional post.

The Election Commission has written a letter to President Ram Nath Kovind for action against Rajasthan Governor Kalyan Singh over his comments seeking Prime Minister Narendra Modi's re-election. The powerful election body had on Tuesday found the Governor had violated the rules of his constitutional post and were also against the "spirit" of the poll code.

Last month, Kalyan Singh had said that PM Modi's re-election is a necessity "for the sake of the country" and the society and every party member should work for it.

"We are workers of BJP. Going by that, we definitely want the BJP to win. Everyone wants that once more, Modi-ji should become PM. It is necessary for the country and the society that Modi-ji becomes PM," Kalyan Singh had said.

"BJP workers should accept the party's decision," the Rajasthan Governor had advised BJP workers during a visit to his hometown in Aligarh.

Kalyan Singh has been Governor of Rajasthan since 2014.

The Governor's comments had drawn a sharp reaction from the Rashtrapati Bhavan or President's office, which had said that "no one in a constitutional post is permitted to campaign" for anyone.

In the 1990s, then Himachal Pradesh Governor Gulsher Ahmed was forced to resign for violating the poll code by campaigning for his son. Senior Congress leader SC Jamir, who has served as Governor of Goa, has also been accused of poll code violation.

Kalyan Singh is a former chief minister of Uttar Pradesh and was in power in the state when the 16th century Babri mosque was demolished in December 1992 by Hindu activists who believed it was built on the ruins of an ancient temple marking the birthplace of Lord Ram. His government was dismissed.

Kalyan Singh quit the BJP in 1999 and returned in 2004. In 2014, soon after the BJP came to power, Kalyan Singh was appointed Governor.

Both his son Rajveer Singh and grandson Sandeep Singh are BJP lawmakers.