A number of opposition parties, including the Congress, the Trinamool Congress and the DMK, staged a protest at Jantar Mantar in Delhi today, to demand the release of scores of political leaders arrested or detained in Jammu and Kashmir A number of opposition parties, including the Congress, the Trinamool Congress and the DMK, staged a protest at Jantar Mantar in Delhi today, to demand the release of scores of political leaders arrested or detained in Jammu and Kashmir. Senior Congress leader Ghulam Nabi Azad, one of those at the protest, accused the centre of destroying democracy and said "we are living in a fool's paradise". CPI general secretary D Raja said the abrogation of Article 370 was undemocratic and "the beginning of a fight against fascist forces".

Nearly 400 Jammu and Kashmir politicians and leaders, including former Chief Ministers Omar Abdullah and Mehbooba Mufti, were either arrested or detained following the centre's controversial decision to withdraw special status to the state and split it into two Union Territories. The move also prompted a stringent security lockdown across the region that included the snapping of phone and internet services, as the centre looked to quell protests against its decision.

Speaking at the event, Ghulam Nabi Azad, who is also a former Jammu and Kashmir Chief Minister, said the ruling BJP had "made a great joke of the Indian constitution".

"If we do not recognise that there is no democracy, then we are living in a fool's paradise. The ruling party has made a great joke of the Indian constitution," he said.

"What kind of law is this? I am from Jammu and Kashmir and I am not allowed to go there. I tried twice but was sent back. Leaders have been locked up," he added.

Mr Azad was twice stopped at Jammu airport, most recently on Tuesday, and was "forcibly" sent back to Delhi on each occasion, a party spokesperson was quoted by news agency PTI. 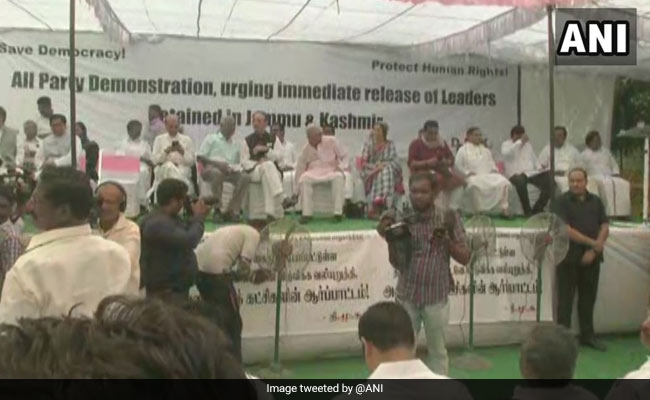 Protesting parties included the Congress, the Trinamool Congress and the DMK

CPI leader D Raja said that while Jammu and Kashmir was an integral part of India, democratic practices had to be followed.

"Why are political leaders house arrest? Where is the democracy? Where is the normalcy? This is going to be the beginning of a fight against the fascist forces," he said.

In a resolution introduced at the protest, the opposition parties hit out at the "chilling crackdown on free speech and the right to assembly" and, in a strongly-worded resolution, said the opposition would continue to stand by the people of Jammu and Kashmir.

Earlier this week Congress general secretary Priyanka Gandhi Vadra hit out at the centre over the alleged arrests and claimed the BJP was eroding the country's democratic identity through such acts.

"On what grounds have Congress leaders in Jammu and Kashmir been arrested? Is it a crime to speak to the media? It's now 15 days since former Chief Ministers who respected and abided by the Constitution of India just like our leaders have been under arrest," she tweeted.

With inputs from ANI, PTI, IANS