The S-200 solid propellant booster was produced at L&T's Powai facility in Mumbai. 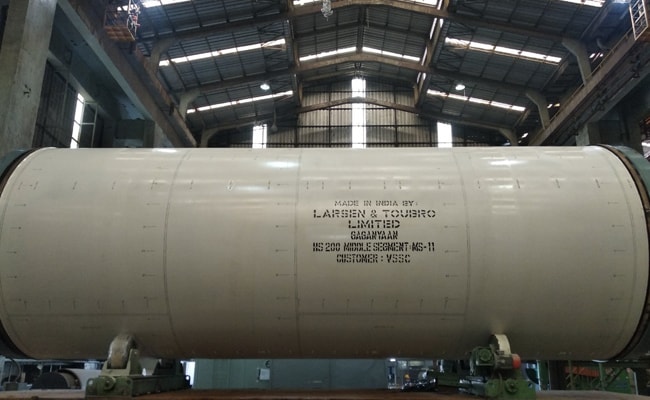 The S-200 is a solid propellant booster for ISRO's GSLV Mk III.

Engineering conglomerate Larsen & Toubro (L&T) today said it had delivered ahead of schedule a key component of the Gaganyaan, the launch vehicle for India's planned human flight programme, despite all COVID-19 restrictions.

The S-200, a solid propellant booster for ISRO's Geosynchronous Satellite Launch Vehicle Mk III, which was delivered to ISRO with zero defects, was produced at L&T's Powai Aerospace Manufacturing Facility in Mumbai, a press release from the company said today.

The critical booster segment was jointly flagged off in a virtual event by ISRO chairman Dr K Sivan and L&T whole-time board member Jayant Patil, the release said.

"Both the teams have relentlessly worked on realising the flight hardware ahead of schedule while maintaining the highest quality standards required for a Human Space Flight Mission," Dr Sivan said in the press release.

L&T, which has partnered ISRO for several decades now, is playing a key role in the space agency's Human Space Flight Programme. In the past, the company has been involved in the production of a range of hardware for ISRO's missions, including Chandrayaan and Mangalyaan.

India's Gaganyaan mission, announced some two years ago, aims to send a three-member crew to space for a period of five to seven days by 2022 when India completes 75 years of Independence. It's first leg, an unmanned space mission that was planned for December 2020, has been delayed due to the coronavirus pandemic.

The manned mission was originally scheduled for December 2021, but is now likely to be delayed, although all efforts are on to stick to original plan. The Indian astronauts will be placed in a low-earth orbit of 300-400 kilometres. The total programme cost is expected to be less than Rs10,000 crores.