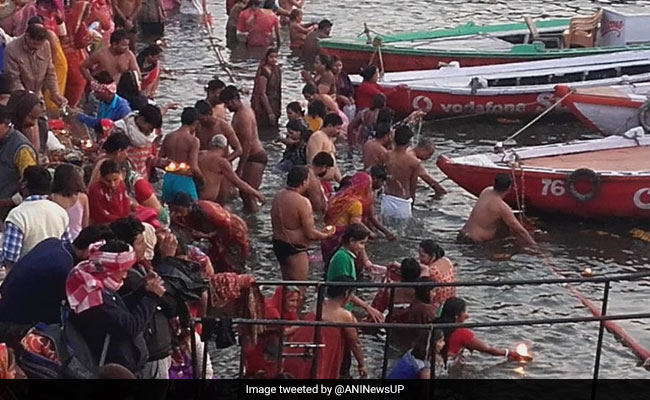 Thousands of devotees took a holy dip here at the Sangam

Amid tight security, the 55-day long Kumbh Mela commenced with the Shahi Snan of Akharas at Prayagraj in Uttar Pradesh today. ''Chalo Kumbh Chale'' is the slogan and also the mantra for peace maybe for thousands of visitors who arrived in the city on Monday for the Kumbh mela, the largest congregation in the world, and walked for miles as they made their way to the Sangam for a ritual dip in the waters.

The streets of Prayagraj have become a canvas for artists as many murals with various themes are being painted. An area of 20 lakh sq.ft area, has been designated for the street art projects under an initiative by Kumbh Mela Authority called ''Paint my city.''

The Kumbh Mela is the largest human congregation in the world, with over 130 million pilgrims expected to participate in the festival with the belief that taking a dip in the holy water of Ganges River will pave the way for their salvation and would rid them of their sins.

Here are the highlights of the Kumbh Mela 2019:

Jan 15, 2019 17:53 (IST)
According to the Kumbh Mela administration, over 2 crore people took the holy bath during Makar Sankranti
Jan 15, 2019 17:33 (IST)
Nearly 30,000 police have been deployed to oversee crowds for the huge undertaking, and prevent stampedes that have marred previous gatherings. Patrol drones buzzed over a 45-square kilometre encampment set aside specially for pilgrims. (news agency AFP)
Jan 15, 2019 16:51 (IST)
Union minister Smriti Irani took a holy dip in the river Ganges as Kumbh Mela began today with a Shahi Snan at Prayagraj in Uttar Pradesh 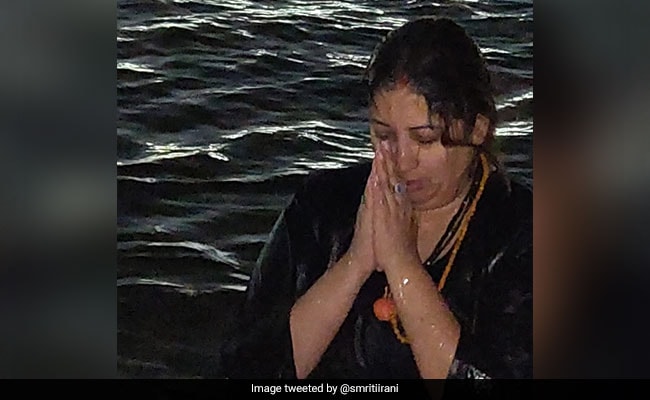 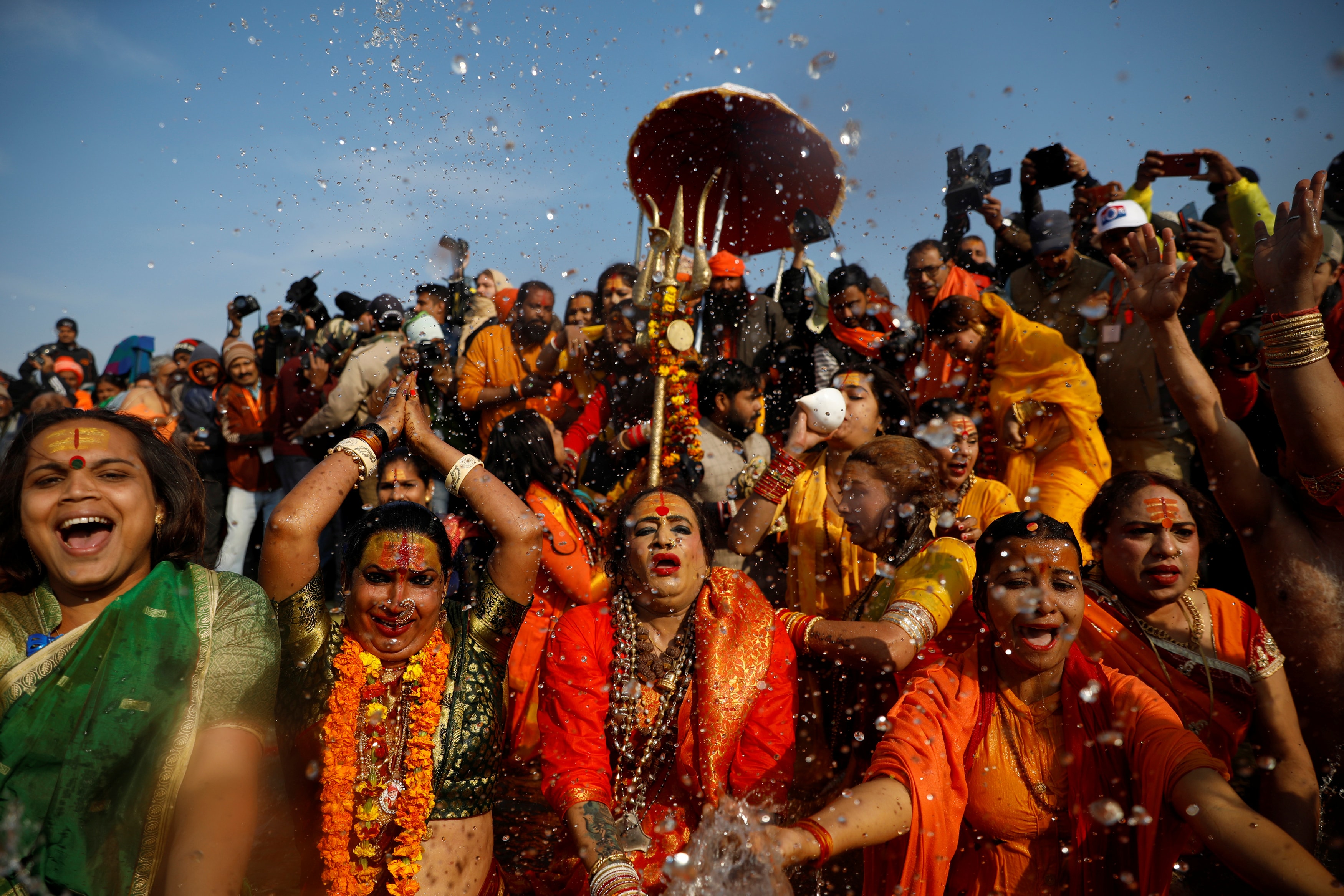 Jan 15, 2019 14:37 (IST)
UP religious affairs minister Laxmi Narayan Chaudhary has claimed that it's perhaps for the first time since Independence that proper arrangements (of milk, ghee, food, blankets and firewood) have been made for the seers, ashrams and akharas.
"Nearly 350 years ago, the name of Prayagraj -- considered a prominent centre of Hindu culture and Sanatan Dharma -- was changed to Allahabad. However, last year, under the leadership of UP Chief Minister Yogi Adityanath, it was decided that Allahabad should be renamed as Prayagraj, as mentioned in ancient Indian texts including the Vedas."
"And it is after 350 long years that the world''s biggest spiritual congregation is being held in Prayagraj in the form of Kumbh Mela," he said.
Jan 15, 2019 12:43 (IST) 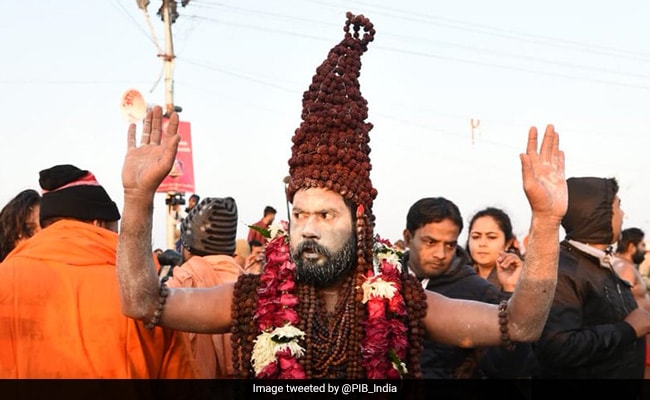 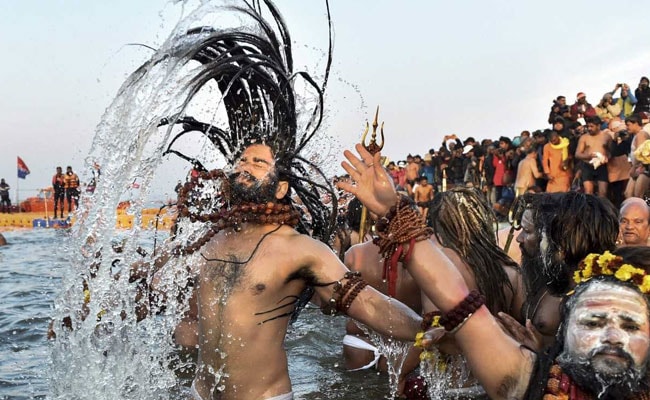 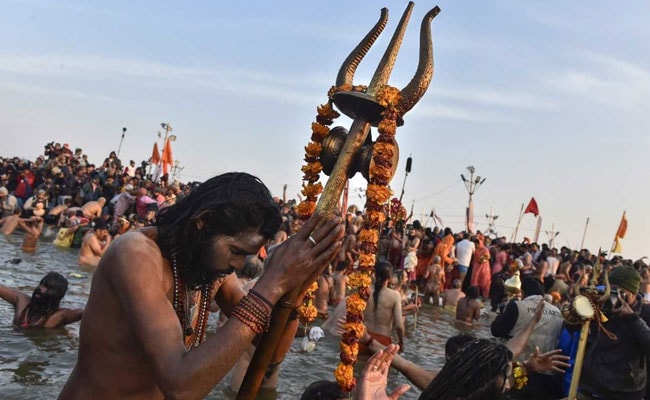 Jan 15, 2019 11:36 (IST)
Order of the Holy Dip
The order in which the holy dip is performed by various akharas is pre-determined. It starts with Mahanirvani along with the Atal akhara, the Niranjani along with the Ananada Akhara, and the Juna along with the Avahana and Agni akharas.
They are followed by Nirvani akhara, Digambara akhara, Nirmohi akhara, Bada Udasin akhara, Naya Udasin akhara and lastly by the lone Sikh akhara called Nirmal akhara.
Jan 15, 2019 11:18 (IST)
Sadhus of 13 akharas (seven Shaiva, three Vaishnava, two Udasina, and one Sikh) who have traditionally participated in the Kumbh Mela, the largest congregation in the world, were the first to take the holy bath known as ''Shahi Snan''.
Jan 15, 2019 10:50 (IST)
Over three million devotees from across India and abroad, braved the icy cold water to take a holy dip in the confluence of river Ganga at the annual Gangasagar Fair in West Bengal's Sagar Island on Makar Sankranti.
"Almost 31 lakh people bathed at Sagar since morning, far surpassing the attendance last year. Lakhs took the holy dip on Friday evening as well. More pilgrims have come to Sagar this year as the weather is better. We are expecting the number to go up as the day progresses," Panchayat and Public Health Engineering Minister Subrata Mukherjee said. 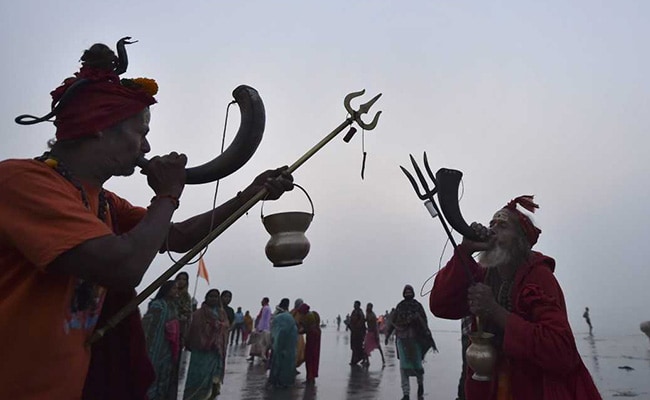 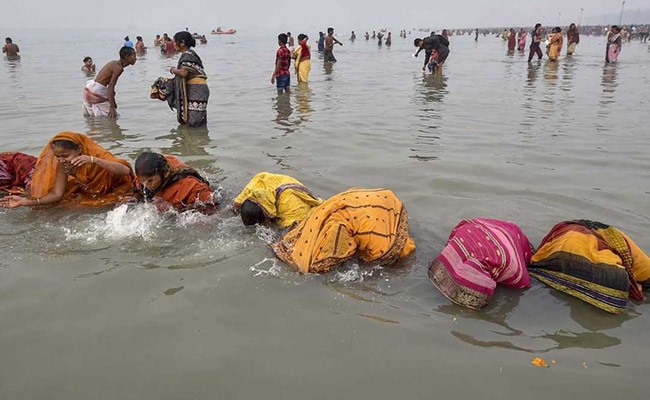 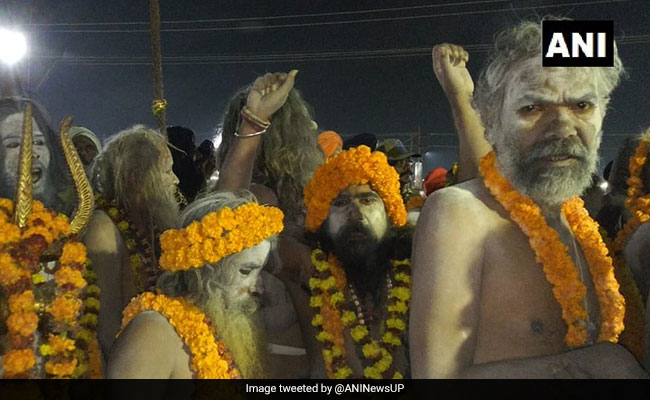 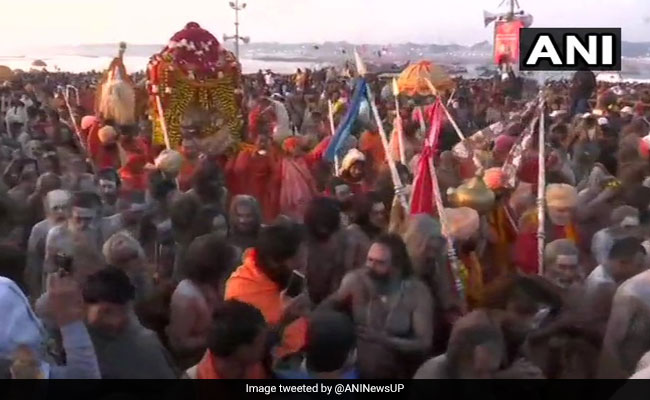 #WATCH Hindu seers and saints head towards Sangam Ghat for a holy dip in river Ganga on the occasion of first 'Shahi Snan' at #KumbhMela2019 in Prayagraj pic.twitter.com/AdeDOAItHM 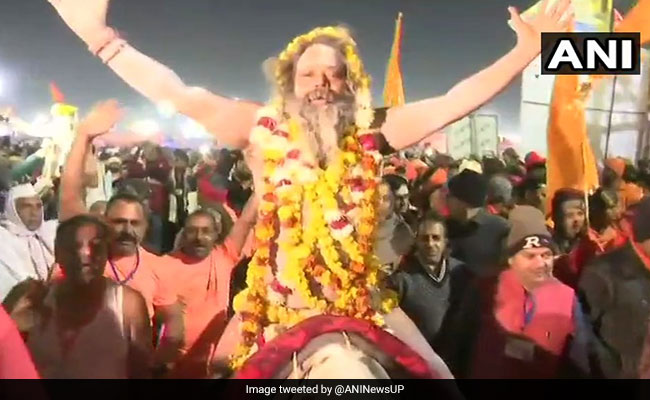 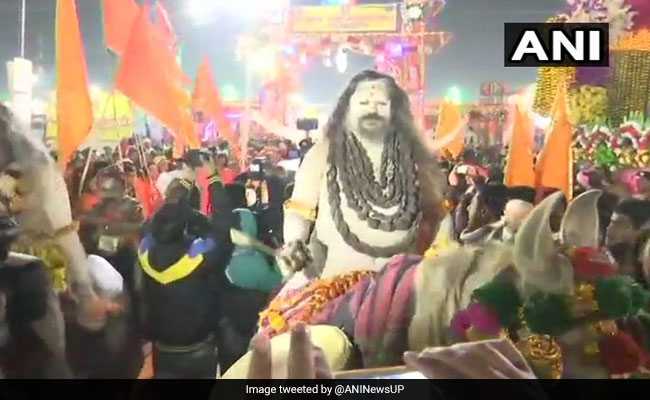 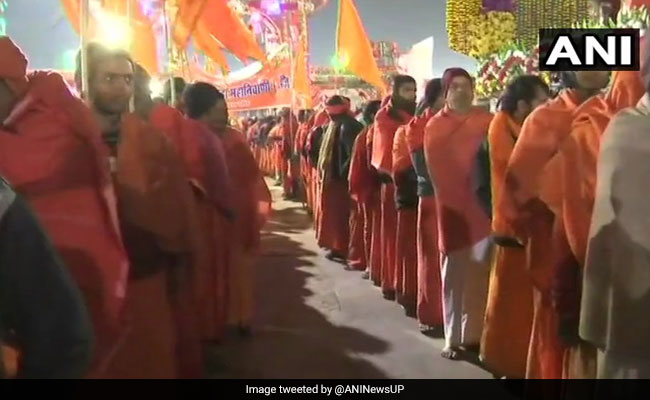 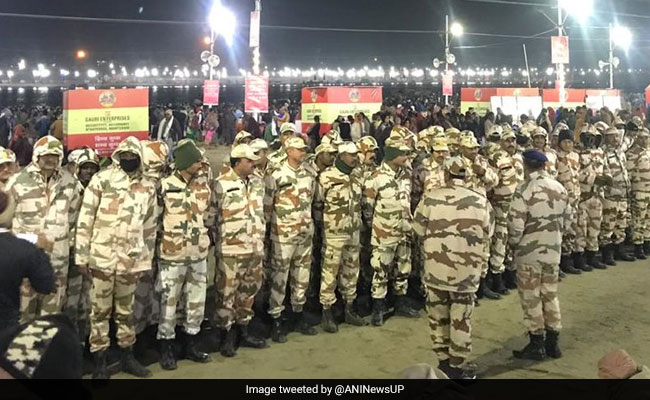 Jan 15, 2019 09:36 (IST)
Thousands take dip in Sangam -- the confluence of the Ganga and Yamuna and the mystical Saraswati rivers. 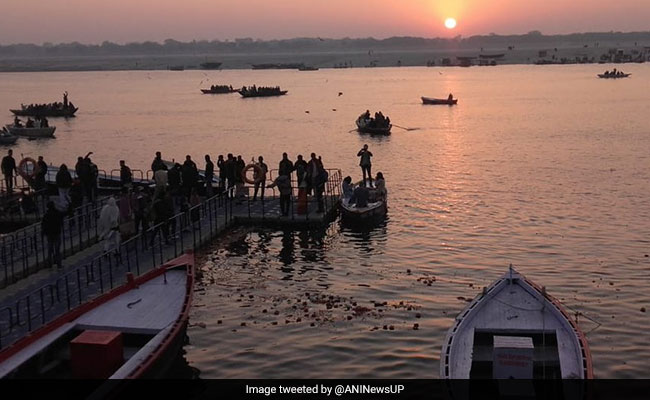