Anmol Gagan Maan, 3 other first-time MLAs in second batch of ministers since AAP came to power in Punjab; senior leader Aman Arora also gets a spot 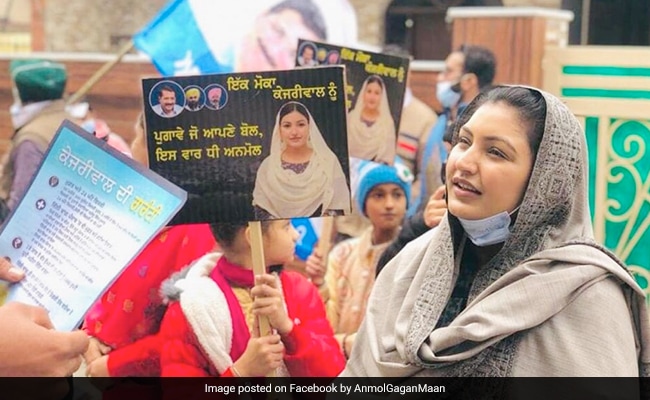 Singer Anmol Gagan Maan, who sang a 'Kejriwal Anthem' ahead of the Punjab polls earlier this year, is one of five Aam Aadmi Party (AAP) MLAs who became ministers in the Bhagwant Mann-led government in Punjab today.

This is the second batch of ministers sworn in after the Arvind Kejriwal-led party came to power with 92 of the state's 117 seats. Ms Maan is also only the second woman in the 15-member state cabinet. Three slots are vacant.

A prominent singer already before joining the party, Anmol Gagan Maan was the lead singer of the AAP campaign song released last January.

Of the five new ministers, only Aman Arora from Sunam has been a legislator before. The four first-timers include Ms Maan from Kharar segment, Inderbir Singh Nijjar from Amritsar South, Fauja Singh Sarari from Guru Har Sahai, and Chetan Singh Jourmajra from Samana. Of the party's 92 MLAs, 85 are first-timers.

While Inderbir Singh Nijjar is from the Majha region, the other four are from the Malwa, which has nearly half the state's assembly seats. The third region, Doaba, already has some representation in the cabinet.

Malwa is seen as the bedrock of AAP's strength in Punjab, though a recent loss in the Lok Sabha bypoll from Sangrur - the seat that Bhagwant Mann vacated after becoming chief minister - has added a caveat.

After the victory in March, 10 MLAs, including eight first-timers, were made ministers, besides Bhagwant Mann. In May, Health Minister Vijay Singla was sacked over corruption charges.

While making additions now, caste and religion -- besides region — were considered, sources said. Aman Arora, whose winning margin was the highest in the elections at over 75,000, was the first one to take oath today. The fact that Mr Arora was not inducted in the first batch had led to questions as he is a prominent Hindu face of the Punjab AAP unit.

Sincerest gratitude to @ArvindKejriwal ji, @BhagwantMann ji for posing faith in me by inducting me into Pb Cabinet.

Fauja Singh Sarari, the MLA from Guru Har Sahai, is a retired policeman from the Dalit community of Rai Sikhs, a political bloc in the south-western region bordering Pakistan. Choosing Mr Sarari also gives representation to the border region as a whole.

Chetan Singh Jourmajra is from Samana in the Patiala area, where the erstwhile royals led by Captain Amarinder Singh are seen to be losing ground. Inderbir Singh Nijjar, the only from Majha region, is president of the Sikh organisation Chief Khalsa Diwan.

Governor Banwarilal Purohit administered the oath to the new ministers at the Raj Bhawan. All of them chose to take oath in Punjabi.

Portfolios were not announced immediately.