Karnataka Chief Minister BS Yediyurappa is in flood-hit Shivamogga district today, one of the worst-affected areas of the state. Lakhs have been displaced in different parts of the country due to floods.

Hundreds have been killed in different parts of the country and lakhs have been displaced after monsoon rains battered several states. Maharashtra, Karnataka and Kerala are among the worst-hit states.

In Kerala, which is still recovering from the worst deluge in a century last year, 85 people have been killed since last week due to floods. More than two lakh people are in relief camps.

Karnataka Chief Minister BS Yediyurappa is in flood-hit Shivamogga district today, one of the worst-affected areas of the state.

Aug 13, 2019 21:30 (IST)
The number of deaths from floods in Karnataka have reached 54 and 15 are missing, the government said on Tuesday. Nearly 7 lakh people have been evacuated and 4 lakh have been moved to shelters across the state. More than 55,000 houses have been damaged. The weather office has said that amount of rainfall in the state is likely to reduce over the next few days.
Aug 13, 2019 20:21 (IST)
13 dead, 4 missing in Belgaum floods
Aug 13, 2019 18:04 (IST)
Rahul Gandhi Tweets After Visiting Flood-Hit Wayanad

Congress leader Rahul Gandhi on Tuesday praised the people of his Wayanad Lok Sabha constituency in Kerala, which has been battered by a flood and landslides, saying that the bravery and dignity displayed by them in the face of tragedy was "truly humbling".

"I left Wayanad with nothing but pride for the people I represent," Mr Gandhi wrote on his Facebook and Twitter pages on Tuesday after a two-day visit.

I left Wayanad with nothing but pride for the people I represent.

The display of bravery and dignity in the face of immense tragedy is truly humbling.

It is such an honour and pleasure to be your MP.

#MaharashtraFloods: National Disaster Response Force (NDRF) has established a medical camp on Haripur road in Sangli. Two doctors of NDRF along with paramedics and support staff with essential medicines are present there to ensure medical help to people. pic.twitter.com/pPw3Anz9Zu

"The state government will do everything possible to give maximum help and support to all, so that they come back to normal life very quickly. Our first task is to complete the rescue operations and then we will shift our focus to extensive rehabilitation work," Mr Vijayan assured.

He gave this assurance even as the meteorological department gave a fresh red alert in Idukki, Alappuzha and Ernakulam districts of more rains, while massive rescue operations are currently on at Puthumala at Meppadi and Kavalapara near Malappuram where 46 bodies are feared trapped under the mud.

Aug 13, 2019 10:56 (IST)
Situation Very Bad In Karnataka: BS Yediyurappa
Karnataka Chief Minister BS Yediyurappa on Tuesday requested the Centre to release financial assistance of Rs 10,000 crore immediately for the state which is reeling under floods caused by incessant rains.
BS Yediyurappa, who was in Shivamogga to review the situation in the city, said he is going New Delhi on August 16 to meet Prime Minister Narendra Modi to discuss the situation in the aftermath of the deluge.
"The situation is very bad. Home Minister Amit Shah and Finance Minister Nirmala Sitharaman also conducted inspection. There is a loss of over Rs 50,000 crore in the state. On August 16, I am going to Delhi to meet the Prime Minister regarding this," Mr Yediyurappa told news agency ANI.
Aug 13, 2019 10:07 (IST)
Since August 8, 88 people have been killed in floods in Kerala. 29 deaths have been reported in  Malappuram and 12 people have been killed in Wayanad.
Aug 13, 2019 10:02 (IST)
Kerala Chief Minister To Survey Flood-Hit Districts 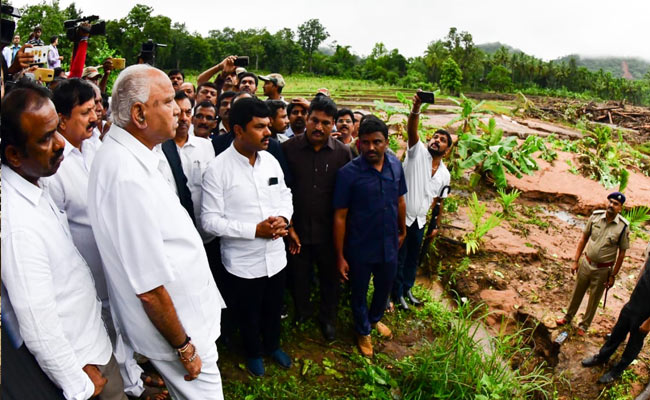